It’s the last day in April, which means two things: 1) Almost time for a weigh-in (look for that in an upcoming post), and 2) my next stair climb race is now 1 month away. I haven’t yet mentioned this race on the blog, mainly because it’s so intimidating that I prefer to just not think about it. I will mention it soon, though, I promise!

Ever since my Aon Center race 3.5 weeks ago (recap and video here), I haven’t been on a StairMaster or trained on actual stairs, and it’s been great. I haven’t slacked on working out, I’ve just been doing other things. After doing three big races (Aon Center, San Diego, and Las Vegas) in a little over a month, I was due for a little stair hiatus. But with my next race on the horizon, exactly one month away, I decided to kick off my training by going somewhere new. And the place I found has an awesome view!

I was in the Hollywood Hills, baby! Specifically, an neighborhood called High Tower Court, which is in an area called Hollywood Heights. High Tower Court was first built in the ’30s, and it’s a cluster of homes and apartment buildings (some of which were designed by Frank Lloyd Wright’s son) at the top of a steep hill. None of these homes are accessible by car. Instead, there’s rows of garages at the base of the hill – and only two ways up. If you live in one of the houses, you have a key to access an elevator, which is housed in a tower at the end of High Tower Drive: 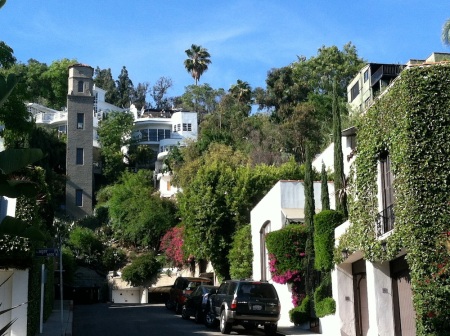 If you don’t have a key, or you’re an exercise enthusiast like me, then you take the stairs. The Broadview Terrace Stairway has 136 steps, beginning with these…

…and ending with these:

Once you reach the top, the elevator tower looks a lot smaller:

Because this whole neighborhood was built for foot traffic only, there are many more sidewalks and little bridges and paths. These people all have addresses that refer to sidewalks, not streets, so halfway up the Broadview Terrace Stairway is a sidewalk intersection with street signs, which really freakin’ tickled me: 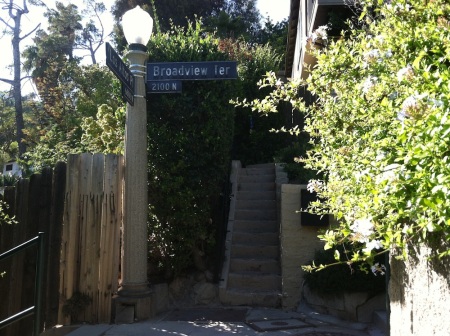 I arrived and explored for about 20 minutes, walking the hills and stairs, scoping the place out. There were little lizards scurrying around everywhere.

It was a nice warm-up, but then the workout really began. I decided to do five sprints up the Broadview Terrace Stairway (there are two expanses of flat sidewalk, too, maybe totaling 40-50 yards), with the goal to beat my previous time during each sprint. I messed up my stopwatch during the first sprint, so that time is a mystery, but my times for the subsequent sprints were as follows:

Success! I didn’t time my rest periods, although I knew they increased as the workout progressed (between sprints 3 and 4, for example, I helped a lost pizza delivery guy look up an address – poor guy was about 1/2 mile away from where he needed to be).

Then, on to Part 2 of my workout, which happened… on a completely different staircase! The Glencoe Stairway is a few blocks from the Broadview Terrace Stairway, and they’re longer: 213 steps, spread out between two long blocks. You start here…

…and then you only have all these to go: 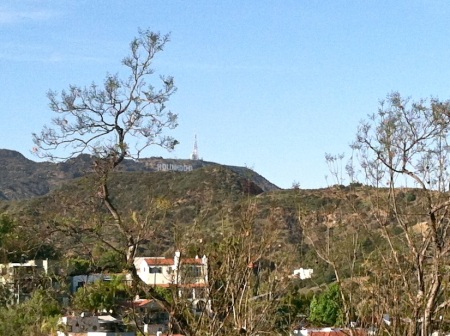 And even further away was the Griffith Observatory (read about my Observatory hike here): 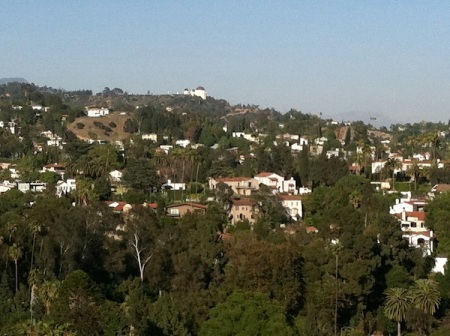 And even farther than that were the skyscrapers of downtown, including all three that I’ve raced up:

The sprints took it out of me, but I decided to climb the Glencoe Stairway three times, at a moderate pace. I finished my workout with a celebratory selfie: 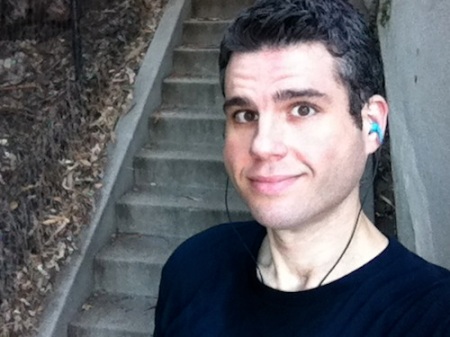 There’s one more local landmark in this neighborhood that I specifically didn’t mention, and that’s because it’ll be another primo training location, and I have tentative plans to go there soon with a friend. In the meantime, I felt good about this workout. I felt a little rusty on the stairs, but I was expecting that. I loved being outdoors and exploring an area I’ve driven by countless times. Plus, with this workout under my belt… I’m officially back in training!

This entry was posted on Wednesday, April 30th, 2014 at 12:29 am and is filed under Uncategorized. You can follow any responses to this entry through the RSS 2.0 feed. You can leave a response, or trackback from your own site.