Stair climb races are brutal. Just brutal. I competed in my 6th stair race over the weekend, and when I got to the top of the 1,455 steps in the Stratosphere in Las Vegas, I pretty much collapsed in a heap. This is about a minute after crossing the finish line, and my heart is still pounding:

Now that you know I finished (and am still alive), I’ll go back a little bit. If you’ve never been to Las Vegas, the Stratosphere is a hotel and casino at the north end of the Strip that features the tallest observation tower in the United States. It’s a impressive, imposing structure that you can see from all over town.

Naturally, it only gets taller as you get closer. Check it out from a few blocks away (that’s me in the foreground)…

…and from my hotel room window… 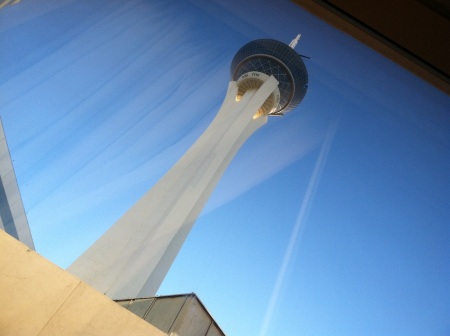 …and from my favorite point of view, directly beneath it:

The tippy-top of the spire is 1,148 feet above the ground, but the race up the stairwell ended at the observation deck, 885 feet high. That’s roughly 66 stories (although the Stratosphere folks like to exaggerate and claim it to be 108). There’s 1,455 steps to that observation deck, and the Scale the Strat race (sponsored by and benefiting the Nevada chapter of the American Lung Association) is up most of them, excluding the few you walk up to get to the starting line.

I was sponsored by the wonderful folks at StairMaster, so I proudly threw on my StairMaster shirt and got my bib – good ol’ lucky number 173!

I modified the back of the shirt so I could do my own shameless self-promotion: 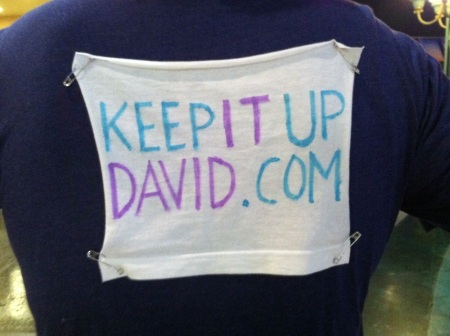 Before I forget, I want to thank StairMaster again for their support. Their machines have been instrumental in my training (here’s proof and more proof) and general health, and their financial support in this endeavor really means a lot to me. The folks at StairMaster have been so kind, and the whole sponsorship has been a wonderful experience. Plus, Vegas is even more fun on someone else’s dime!

I also want to express my gratitude to Janet, Dana, Karen and my parents, all of whom donated on my behalf to the Lung Association so I could race. It feels good to do something for charity, and thanks to donors like them, this event raised about $150,000!

Okay, back to recapping! There were about 500 racers total, split into groups. We lined up one group at a time on the sidewalk outside the tower and were then escorted in and up a couple flights to the actual starting point, outside the main tower stairwell. 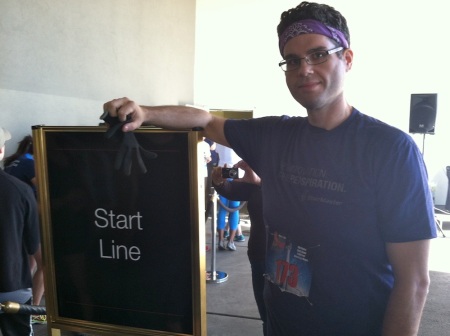 There’s an official at the starting line who was sending in a runner every 15 seconds. He gave me the go-ahead when it was my turn, and I took a deep breath and started up the stairs.

The Stratosphere stairwell is different from any other I’ve seen. Because there are no floors for most of it, there aren’t doors, either. There’s nowhere to go on the landings except up. Each flight of stairs is longer, too – 20 steps between landings, instead of a typical 9 or 10.  Plus, it’s not a confined space. The stairwell is voluminous and freestanding (it only connects to the tower walls at the landings) so you can look over the handrails and see all the way down and all the way up. I could’ve gotten some kickass photos, except that I’m racing – there’s no time for a photo shoot!

After climbing about 58 stories in the tower core, you reach the 8-story pod of observation decks, restaurants, lounges, and so on. Those final 8 stories are in a more traditional stairwell, and I summoned the little energy I had left and tried to finish strong. As the first photo illustrated, I was wiped out.

My time was 15 minutes, 6 seconds! I’m really happy with that time, and very proud of it.

But I was frustrated with my performance, and here’s why: I trained like crazy. I really focused on my form and climb technique. I practiced with a stair climb all-star and got pointers. I bought special gloves to better take advantage of the handrails. And when it came time to employ all this new knowledge during a race, I let it all go out the window. Climbing stairs is tough (training can make you better, it doesn’t make it easier), and when I first started feeling tired, instead of buckling down and focusing on my new skills, I reverted back to old habits. Argh!

Despite my time, I just felt like it wasn’t my day. There’s a few reasons why:

I know all this may sound nitpicky and overly-critical, but I’m not making excuses. I take ownership of my performance, and I see all of this as a learning opportunity. Now I’m familiar with the Strat, have a foundation to build on for next year, and have more things to consider and focus on when I prepare for other races.

Plus, all this scrutiny reflects a major shift in attitude and intent. I’m no longer okay with simply finishing a stair climb race. If I’m going to show up, then I’m going to give it my all. I want to IMPROVE. I want to EXCEL. I want to become BETTER. STRONGER. FASTER. I’ve never been so driven to succeed at a sport or physical activity, and that’s an incredible feeling to embrace. I’m thinking like an athlete, and that’s something the old 400-pound version of me would’ve laughed at.

Let’s crunch some numbers! Here’s how my time of 15:06 breaks down:

Apart from the numbers and goals, the other main reason why I climb stairs is for the views. It was a beautiful day in Las Vegas, and there’s no higher point in town. I could hang out up here all day. Here’s the view looking downtown… 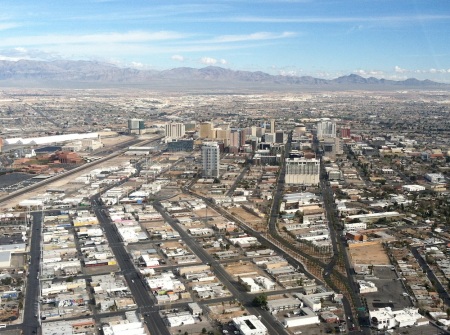 …and the view of the Strip… 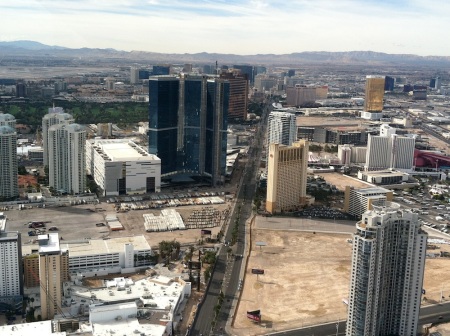 …and since the observation deck windows lean outward, you can also look straight down! 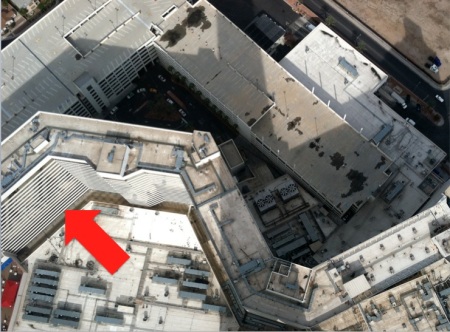 That’s the hotel and parking garage, and the arrow’s pointing to my hotel room.

Here I am with my finisher’s medal and my friend Tavi. Scale the Strat was Tavi’s first stair climb race. He kicked ass and finished in 12:06!

In my next post, I’ll share more photos from my Las Vegas adventures, including where we went, what I ate, and how my wallet fared at the casino. I might also throw in a story about a prostitute. Until then, there’s only one thing left to say…

This entry was posted on Tuesday, March 4th, 2014 at 12:32 am and is filed under Uncategorized. You can follow any responses to this entry through the RSS 2.0 feed. You can leave a response, or trackback from your own site.