Happy October! It’s the beginning of a new month, which means it’s time to update my weight loss chart. I had a hunch my weigh-in would bring good news, after all, I’ve been busting my butt preparing for last week’s stair climb race, and my eating has been good. Plus, I’ve been having weigh-ins with Mo, my trainer, on the scale at the gym, and I’ve been seeing loses on there. But I don’t use the scale at the gym to update my chart, I use my home scale. So let’s see the results, shall we? 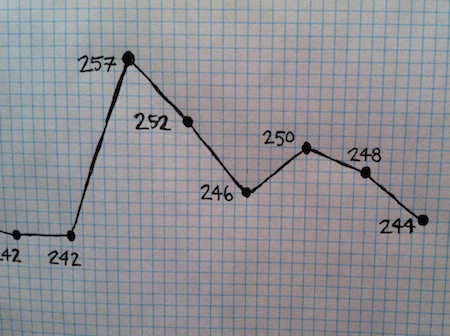 FOUR POUND LOSS! Ba-bam! What’s even better is that 244 is my lowest weight in 6 months! You know, I really try to embrace the idea that what’s important is how I feel, and my overall health, as opposed to a number on a scale… but damn, seeing a small number on a scale sure does feel good. This puts my total weight loss at 158 pounds!

I’ve set a goal for the month of October: Lose at least 5 pounds, so I’m officially in the 230s. I haven’t been in the 230s in over a year, and 5 pounds in 1 month is certainly attainable. 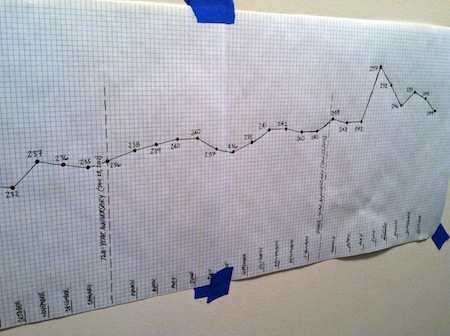 Once I’m in the 230s, it’ll be time to push towards 232, which is my all-time lowest weight, which I hit two years ago. Then, on from there! Here’s my entire weight-loss chart: 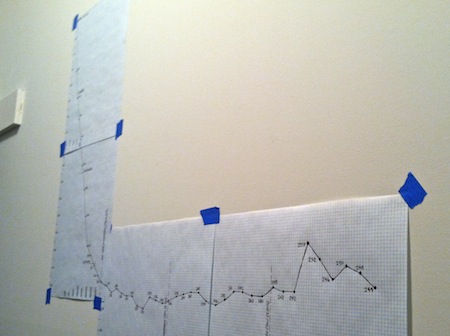 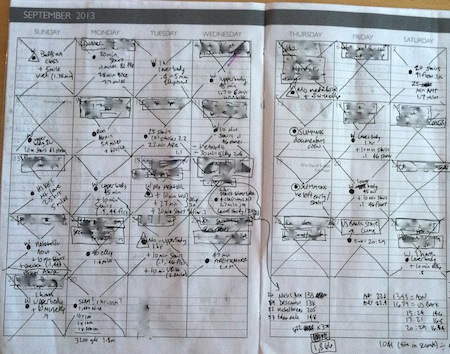 In total, I worked out 26 of the 30 days in September, including 2 Slimmons classes, 3 sessions with Mo, and 1 Balls Out class. Fourteen of those workouts focused on weightlifting, implementing routines I learned from Mo. That’s a very successful month!

I haven’t really written about it all year, but in January, I set a goal to exercise more in 2013 than I did in 2012. I worked out 262 times in 2012. Lately, I’ve been pushing myself, thanks to the kick in the pants that working with Mo has brought. But I’ve had a few medical issues this year that have sidelined my exercise, namely an operation and a sprained foot, and a few bouts with motivation (read about the big one here) that kept me from the gym.

So, as we enter the fourth quarter of the year, I’d thought I’d see how I was doing with my goal. During the first 9 months of 2012, I worked out 211 times. During the same period this year, I’ve worked out…. drum roll please… 154 times.

Yea, that’s pretty much what I expected. Oh, and that means my 2013 goal is officially unachievable at this point. In order to tie my 2012 total, I need to workout on 108 days before year’s end. Unfortunately, there are only 92 days left.

I’m not going to let one unreached goal bring me down – especially not now, when I’m in the middle of a blazing hot streak. I’ll finish the year as strong as I can, and set myself up for a strong 2014.

I’ve got one more awesome chart to share! I met with Mo for a few minutes yesterday. When I started working with him in the beginning of July, he took all sorts of measurements, and those measurements needed some updating. The headline is that in the past 3 months, my body fat has gone from 26% to 22%! That’s pretty sweet. In addition, I’ve lost inches all over my body. Check it out: 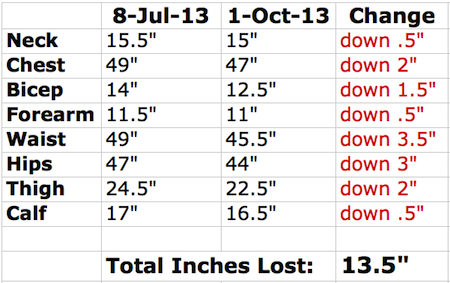 Thirteen and a half inches? I’m quite impressed with myself!

I’m no longer able to train with Mo – I just can’t afford additional sessions with him at the moment. But, he suggested I check in with him every few weeks for a weigh-in and measurement update, and I look forward to doing that. He’s done exactly what I hoped he would: set me up with weightlifting programs and exercises, and taught me proper form and execution. And look how it’s paying off.

P.S. The updates continue! My next post will be a CARDIO TO VEGAS update… and I can’t wait to write it!

This entry was posted on Wednesday, October 2nd, 2013 at 12:04 am and is filed under Uncategorized. You can follow any responses to this entry through the RSS 2.0 feed. You can leave a response, or trackback from your own site.