Before you close this window and resume looking up time-wasting videos on YouTube (this dinosaur prank is my current favorite), let me explain. I have an exciting update on my completely nerdy, super fun CARDIO TO VEGAS fitness challenge. I’m logging all the miles I complete during all my cardio workouts and adding them up, with the goal of reaching 274 miles – the distance between my home in Los Angeles and Las Vegas. I’m plotting my progress on a map, and – here’s where my inner nerd really shines – researching all the places I pass along the way. I’m finding fascinating facts and stories about all of them!

Check out my CARDIO TO VEGAS Page for lots more info and all the archives!

When I last left off, Pretty Crane was hellbent on stopping her sister Fancy from marrying Luis, who was scheduled to be executed for the death of Dylan Flood, a crime he did not commit. Oh no wait – that’s what was happening on the soap opera Passions in 2007. When I left off, I had gone 210.15 miles and made it to a rest area in the middle of the Mojave Desert, dozens of miles of anywhere. 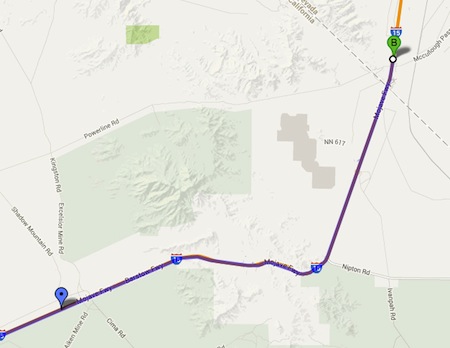 I’m now in Nevada! I’ve gone from California, the #1 most populous state in the country, to the 35th most populous state. Nevada is home to about 2.7 million people, or, about a million less than the city of Los Angeles, where I started this adventure. Here’s something else I just learned about Nevada: the federal government owns 85% of the land in Nevada. It seems like a shocking number, and it is the state with the least percentage of private land holdings, but it’s not unusual in the American west. The feds control 57% of Utah, and between 45-55% of Idaho, Oregon, California, and Arizona. Portions of all this land were set aside for military facilities and national parks, forests, and preserves, but a vast majority of it is leased to ranchers, farmers, and mining and logging companies.

Specifically, my new ending point is just beyond the town of Primm, Nevada, which hugs the border. 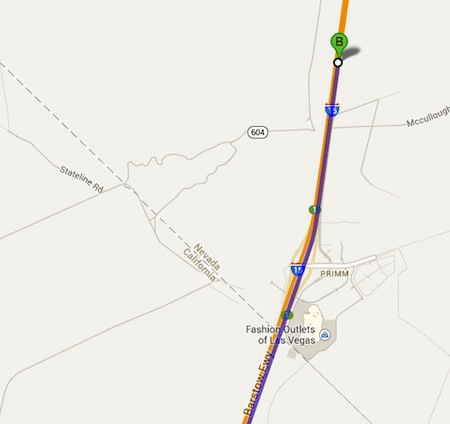 Primm exists for one reason: gambling. There are three large casino/hotel/resorts within mere feet of the border, all owned by the same company, giving Californians an easy way to gamble with driving the additional 40 miles to Vegas. One of them, Primm Valley Resort, has an outlet mall attached to it, where I once bought a $49 Banana Republic shirt that had been marked down to $15.

Next to Primm Valley Resort is the newest of the three properties, Buffalo Bill’s, which opened in 1994. I have yet to stop at Buffalo Bill’s, but it’s on my list, because it has something I really want to experience: the Desperado roller coaster. When it opened in the mid-’90s, the Desperado was the tallest roller coaster in the world. And while it only held that title for a short period, it’s still an impressive ride: the drop is 225 feet, it reaches speeds of 80 mph, and it’s a long ride – about 2 minutes, 45 seconds.

To quote Liz Lemon, I want to go to there.

Across the highway is the third casino/hotel, called Whiskey Pete’s, which was built in the ’70s and was the first casino in Primm. At first, I thought Whiskey Pete was just a name or a corporate mascot, like Toucan Sam or Betty Crocker, but after a little digging, I learned Whiskey Pete was a real guy, and damned if he doesn’t have a great story!

Pete MacIntyre lived in the Primm area decades before the casinos set up shop. He owned the one business in the area, a gas station at the state line. During the great depression, his business slumped, so Pete resorted to supplementing his income with an illegal activity: bootlegging. Pete headed up to the mountains, and distilled his own whiskey in a series of caves. He discreetly sold his brew out of his gas station, and his reputation flourished, earning him the nickname Whiskey Pete. Stories about Whiskey Pete spread far and wide, and Whiskey Pete became somewhat of a local legend. Legend says that when Pete died in 1933, his final request was to be buried in an unmarked grave, standing up, holding a bottle of his own whiskey. For decades after his death, tales of his final resting place circulated, but no one knew where he was laid to rest (or, in Pete’s case, stood up to rest), or if the legend was even true.

Jump to the mid-’90s, more than sixty years later, when Primm is a bustling little gaming center. There’s a need to update the infrastructure in the area, so a new bridge is built across the freeway, connecting Whiskey Pete’s with the other two casinos. Guess what’s found during the construction process? A corpse. Standing up. Holding a bottle of whiskey. Whiskey Pete was back! After they were accidentally exhumed, Whiskey Pete’s remains were laid to rest in a safer location – in one of the caves that he used to to brew his booze.

There’s another interesting piece of American history on display in Primm: the Ford that Bonnie & Clyde were driving when they were ambushed by law enforcement officers and killed on a rural Louisiana road in 1934. The shirt Clyde Barrow was wearing that day is also on display, as well as other memorabilia connected to the famous outlaw duo. 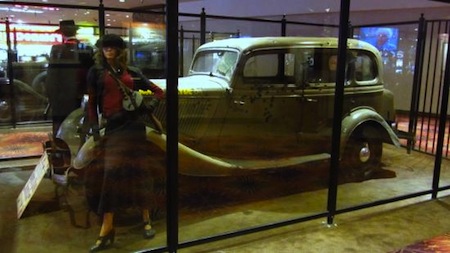 Bonnie & Clyde’s crime spree included countless bank, gas station, and store robberies, and they also killed at least nine people. By the time they were ambushed, Bonnie & Clyde were media sensations, and the six officers that masterminded the ambush wanted there to be no chance that the couple escaped. So when they opened fire at around 9:15am on that Wednesday morning, they shot over 130 rounds into the car. The gunfire was so loud that all 6 officers reportedly suffered from temporary deafness the rest of the day. The coroner’s report said that Clyde Darrow’s body had 17 separate bullet entrance wounds, while Bonnie Parker’s had 26. Their bodies were so bullet-hole-riddled that the undertakers had trouble embalming them, because the fluid would continually leak out.

Even more gruesome was what happened after the ambush. Word spread quickly, and locals flocked to the scene, before authorities could even move the bodies. There weren’t enough police to keep the growing mob under control, and soon looters began scavenging whatever they could to sell as souvenirs: Broken glass from the car’s windows. Bullet casings. One woman was cutting bloody patches from Parker’s dress, as well as bloody locks of Parker’s hair. One man tried to cut off Barrow’s trigger finger, while another almost cut off his ear.

I find the whole thing gross, but I won’t lie – if I stop in Primm some time, I’d probably go check it out.

Time to move on to the maps! Here’s what I’ve completed so far!

And now let’s zoom it out a little bit, to include my final destination in the upper right corner:

I’m so close! Las Vegas is about 37 miles away! I’m in the home stretch!

This entry was posted on Thursday, September 5th, 2013 at 1:32 am and is filed under Uncategorized. You can follow any responses to this entry through the RSS 2.0 feed. You can leave a response, or trackback from your own site.