Halfway To My Scuba Certification

I’m in the process of getting my scuba certification! Scuba diving has always looked exciting to me. I got to try it once, as a kid. My uncle Philip, who has been diving for decades, once brought over a couple scuba tanks when I was about 10 or so, and my brother and I went diving for a few minutes in our backyard pool. There wasn’t much to see, but it was a totally cool experience to be able to breathe underwater.

As an extremely heavy adult, scuba diving was one of those things that I had written off as something that just wasn’t possible. Now that I’ve lost around 160 pounds, it’s very much possible, and I started to get the itch a couple years ago, when I saw my sister Laura scuba diving in some awesome underwater caverns in Mexico. I snorkeled in them (see the cool pics here), but it wasn’t the same. You can only get so deep on one breath, and you can only stay under for so long, but with a scuba tank, you have so much more freedom to explore.

I don’t know why I waited a year and a half after that trip to start the certification process. The kicker is that I totally have a scuba hook-up: my friend Stu is a scuba instructor who teaches a course every couple months or so with an outfit called PCH Scuba. Over the weekend, I started Stu’s class.

PCH Scuba’s class spans two entire consecutive weekends. The first weekend takes place in a classroom and a pool, and the second weekend is held on Catalina Island, an hour off of the coast of Long Beach, where you continue to learn and practice in an ocean environment.

Saturday was spent in a classroom, and before I showed up, I had to read an entire 200+ page textbook and fill out a series of knowledge reviews. You learn about the physics of water and air pressure, the fundamentals about the equipment and how to use it, and all sorts of safety measures and protocols. You have to pass an exam – aced it! Then, you start handling equipment, and learn how to set your gear up and take it apart. And there’s a lot of gear! Here’s all the stuff I have to bring to Catalina this weekend (it’s everything except the tank): 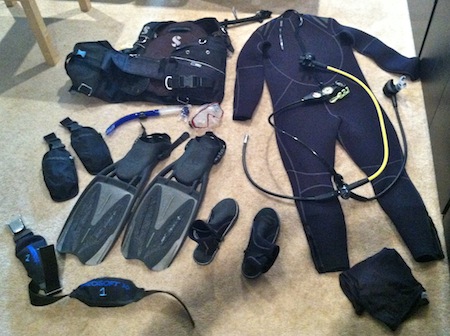 All that gear, including the tank, probably weighs between 50-60 pounds. Plus, divers are weighed so they sink in the water (or, to use scuba nomenclature, so they are ‘negatively bouyant’ in the water) and because I’m a big guy, I have to carry an additional 30 or so pounds in weights.

Sunday was spent at the pool. We met at the San Fernando Regional Pool – a beautiful new public pool about 15 minutes away – at 7:30 am. 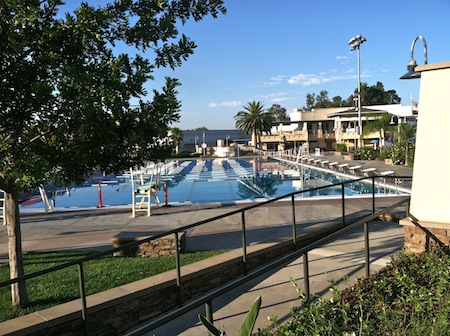 We spent the first couple hours in the shallow part, and then we moved to the deep end. Stu taught us all sorts of maneuvers and skills, like how to properly ascend and descend, how to use your buddy’s alternate air source, how to become neutrally bouyant (so you can hang out underwater without naturally sinking or floating to the surface), how to get water out of your mask while underwater, and the appropriate hand signals to communicate all this with your diving buddy.

I got the hang of most everything pretty quickly. One of the skills caused some frustration, but I’ll be able to work on that next weekend in the ocean. I’ve never paid so much attention to my breathing as I did underwater with that tank strapped to my back. Often, it was the only sound I heard, and I was pleasantly surprised at how long and deep my breaths were, and how long I could extend an exhale. Stu also noticed my breathing, and complimented me on the cardio fitness – apparently I was using less air than other people my size, which means my respiratory and circulatory systems are very healthy and efficient.

We spent hours in the pool – I was more or less in the water from 8:30 to 3:30, and then back to the dive shop to sort out some equipment issues. Before getting out of the pool, Stu and I took a picture with Stu’s underwater camera. Stu’s godson is my godson’s brother, so we took a picture with them to sent to their parents, Katherine and Peter (they’re who I visited on my recent trip to Sweden): 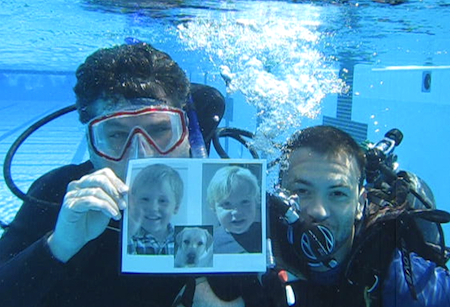 At the end of the day, I was exhausted. I didn’t expect scuba to be so physically demanding, but it was, and it felt great. Next weekend: ocean diving at Catalina! I’ve never been to Catalina, and I’m really looking forward.

This entry was posted on Tuesday, July 16th, 2013 at 1:13 am and is filed under Uncategorized. You can follow any responses to this entry through the RSS 2.0 feed. You can leave a response, or trackback from your own site.

13 Responses to Halfway To My Scuba Certification