There’s a lot to talk about in this post, but I thought I’d kick things off with a quickie update: It’s been one week since my beginning-of-the-month weigh-in, and yesterday I stepped on the scale and was down 2 pounds. Woo-hoo! 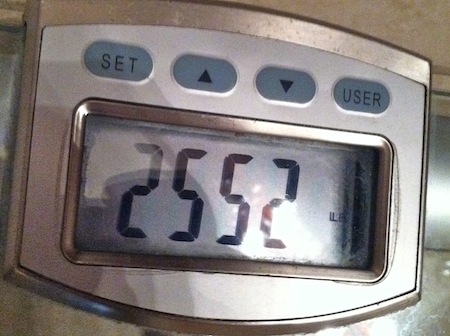 If you’ve been a diligent Keep It Up, David reader (and I know each and every one of you has been, right?), than you’ll remember that, about a month ago, I fell off the wagon (and directly onto a pile a junk food) and stayed off the wagon for a couple weeks after a health concern unexpectedly threw me for a major loop. As the aforementioned two pounds shows, I’m back on the wagon and making progress on losing the weight I gained, but I left you in the dark about what else is going on. Well, you won’t be in the dark for much longer. Here’s what’s going on:

About a month ago, I felt a lump on my testicle. I found it a few days after my Aon Center stair climb, which left my entire lower body sore for about two days. By the third day, I was no longer sore, except for in one area, and decided it was time for a self exam. And that lead to me discovering the lump.

I freaked out. I called my Primary Care Doctor, and got a referral to a urologist. I talked to my dad, who is a physician. I did a little internet research, but then decided to stop, because my mind was already going to the worst places, and the internet only worsened it. I got anxious and scared, and started eating whatever I wanted, in spectacularly large quantities. I didn’t know if the lump was related to or caused by the stair climb, so I suspended exercising.

It took 9 days until I could see the urologist, who confirmed the presence of the lump and ordered an ultrasound. He explained that it could be any number of things, and the ultrasound would provide more information, including if the mass was tissue or fluid. It’s not painful, and I don’t have additional side effects so that ruled out a bunch of things, but there’s still a lot we don’t know.

The ultrasound happened about 5 days after that, and it confirmed that the mass was tissue. It’s actually a paratesticular mass, which means it’s not within my testicle, but adjacent to it. It could be growing on one of the structures around the testicle, like the epididymis. My doctor told me that there’s a chance it could be cancer, but there’s also a “slew of other things it could be” (and that’s a direct quote). I told that to my brother, who is a third-year resident at a hospital in New York, and he looked it up while we were talking on the phone, and found a 30-item list of possibilities.

So, I still don’t know what the lump is, but I’m going to find out soon, because my urologist wants to do an exploratory surgery. This is happening soon (I’m not going to share when or where on this blog, but if you’re a personal friend, reach out via phone/text/email and I can fill you in). IF YOU’D RATHER NOT READ ABOUT THE SPECIFICS OF THE SURGERY, SKIP TO THE NEXT PARAGRAPH. He’s going to make an incision near my bikini line, locate the artery and vas deferens, and follow them to the testicle. The lump will be examined, and a sample will be taken and given to a pathologist, who will examine it on the spot. Depending on what it is and how and where it’s growing, a course of action will be determined and executed right then and there. It may result in an orchiectomy, which is the clinical term for removing the entire testicle, if need be. Then I’ll get stitched up and sent on my way. It’s an outpatient procedure.

I need to be prepared for the fact that, on the day of my surgery, I’ll enter the hospital with two testicles but I may leave with only one. That’d be a big ol’ bummer.

Emotionally, I’m in a much better place than I was a few weeks ago. The worst part about all this is the uncertainty – that’s what really threw me off my game. The stress, anxiety and fear caused me to return to some bad behaviors, which I’ve been able to pull myself away from. Now, even though I still don’t know what the mass is, a course of action is in place, and that’s reassuring. It’s also reassuring to know that it’s very likely that the surgery will take care of everything: if it’s something bad, than they’ll remove it. End of story.

I’ve also been reminding myself that even the worst case scenario isn’t bad at all. If it cancer, it’s one of the best cancers to have. Testicular cancer hardly ever spreads to other parts of the body, and it’s relatively easy to remove. Survival rates for testicular cancer hover between 95-99%; it has one of the highest cure rates of all cancers. Even losing a testicle isn’t really that big a deal. Men can function just fine with one; losing a testicle won’t affect fertility, hormones, or anything else.

It’s still a little scary, but now I’m looking forward to the surgery, just so I can be done with it and move on. I’ve undergone a battery of pre-op tests this week to make sure I’m healthy enough to handle the anesthesia that I’ll be given. I like my urologist, who is very nice and informative, and I feel safe in his care. My mom is flying out to be here with me during the operation, which I’m thankful for. I’ve done all I can do, and now I just gotta wait for the surgery to happen.

The other crappy part is that my doctor predicts that I’ll have to stay away from strenuous activity and exercise for 2-4 weeks after the operation. It’s especially crappy since I’ve worked hard recently to get back on track, and I’m in the middle of a good streak (I’ve exercised 10 of the last 13 days). I’ll try my best to eat well while I’m laid up, but I’m sure the lack of exercise will be a challenge. And I’m up for it!

I don’t know when I’ll next be able to post – it may not be until after the surgery. When I’m feeling well enough to do so,  I’ll update everyone. In the meantime, I’m exercising while I still can, and I’m eating well too.

This entry was posted on Thursday, May 9th, 2013 at 12:05 am and is filed under Uncategorized. You can follow any responses to this entry through the RSS 2.0 feed. You can leave a response, or trackback from your own site.