EXCITING NEWS! You know how I’m featured in Richard Simmons’ new infomercial for Project H.O.P.E.? The infomercial clocks in at a full 30 minutes, but the online version is only 7 minutes, and I was left on the editing room floor. So unless you set your DVR, or happened to catch it on basic cable in the middle of the night, there’s a good chance you haven’t seen my little part of the infomercial yet.

UNTIL NOW! Check it out: the portion featuring the long-term success stories (me and my friends Joanne and Lori) is now on YouTube! It’s only 80 seconds – watch right here:

Big thanks to my buddy Jon. Check out some behind-the-scenes photos from the infomercial shoot here.

The most bizarre thing happened recently. I recently picked up a dozen eggs at Trader Joe’s and hard-boiled them, like I do pretty much every week. Correction: I hard-boiled 11 of them – one already had some cracks, so I tossed it.  When the 11 were finished, I couldn’t resist. I ate a few nearly immediately. The first egg I peeled, low and behold, had a double-yolk! That was pretty cool. Then I peeled a second egg. It too had a double yolk! So did the third. After three eggs I decided to start taking pictures.  The next three also had double yolks! 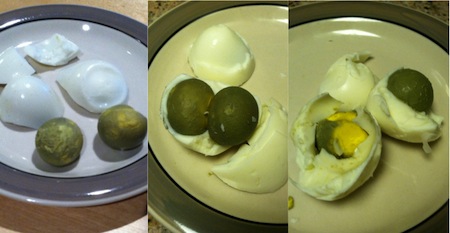 I fought my desire to peel and eat the rest of them, and put the remaining eggs in the fridge. A few days later, I peeled three more: and all of them had double yolks!

My friend Joanne (the same Joanne that’s in the infomercial clip above) shared two newspaper articles with me that claim that finding so many double yolks in one carton beats astronomical odds (read the stories here and here). But, as much as I’d like to think that I beat QUINTILLION TO ONE odds with my carton of double yolked eggs, I don’t buy it for a second. I’ve seen egg processing facilities on the Food Network, and every egg that’s laid gets scanned by laser or x-ray or something and if there’s any sort of imperfection, it gets shuttled off the assembly line. I would imagine that a double yolk would qualify as an imperfection, meaning that at every egg factory, there’s a bin of them somewhere. My guess is that after further examination, perfectly edible double yolked eggs are separated from other inedible, imperfect eggs, thrown in a carton, and sent to retail. I surely lucked out to purchase that particular carton, but it wasn’t dumb luck that every egg just happened to be double yolked.

Still, it makes for a good story, huh? And even better pictures!  Oh – and hold your breath: I know I overcooked the eggs, and that’s why the outside of the yolks are green. But guess what? I don’t care. The yolks end up in the trash. I don’t eat them.

You can check out my review of Eggies, the egg-related infomercial kitchen product, here!

Lastly, It’s April, so that means time to update my weight loss chart. I stayed even this month, which is good enough for me. Not gaining is always a win!

This entry was posted on Wednesday, April 3rd, 2013 at 12:21 am and is filed under Uncategorized. You can follow any responses to this entry through the RSS 2.0 feed. You can leave a response, or trackback from your own site.

3 Responses to Double Yolks. PLUS, Watch the Infomercial Online!