Yesterday, I blathered on and on about how much I love my new new gym. It’s completely awesome. Remember how I mentioned that it’s above a Barnes & Noble and a movie theater and across the street from Ikea? I forgot to mention another business that’s on the same block. I don’t quite know what to say about this particular establishment, except that it combines my two favorite things: mediocre chain restaurant food and girls with big fake tits: 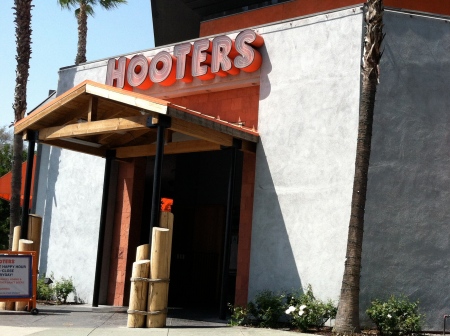 I can’t wait to sweat my ass off and then head over for an order of “Lots-a-Tots.” (A pile of tater tots covered in bacon, cheese, sour cream, and chives. Yep, an actual menu item.)

Today, the general theme of “I love my new new gym” continues, because I used the StairMaster there for the first time, and it was a game-changing experience. It was my first time climbing stairs since my downtown skyscraper climb two weekends ago (see pictures from the roof of the 63-story Aon Center here). I’ve enjoyed my week-long break from stairs, but it was time to start climbing again – I gotta prepare for my next stair challenge, and it’s only 12 days away! I’ll be climbing, on the StairMaster, the equivalent of the world’s tallest building. It’s a fundraiser, so check out my donation page (CLICK HERE!) and throw a few dollars towards an amazing children’s charity in Michigan.A friendly reminder that there’s a bunch of you (I won’t name names) that have told me, either in person or in writing, that you’ll donate, but you haven’t yet! What are you waiting for?

I digress. My new new gym has brand-new, top-of-the-line StairMasters, and within seconds of getting on one, I knew I was on the perfect piece of exercise equipment for me. I was so excited I went and got my camera from my locker to take pictures! Here’s the welcome screen you see when you first step on… can you figure out why I got so excited?

Check out the middle option – Landmarks! I’ve spent the past year and a half conquering landmarks on the StairMaster, and now I’m on a machine that is programmed to help me conquer more! Awesome.

When you click on Landmarks, you get this screen:

Landmarks from around the world: Statue of Liberty, Great Pyramid of Giza, Eiffel Tower, and so on. Guess what the building is on the far right?It’s the Burj Khalifa, the tallest building in the world!This is the building I’ll be hypothetically climbing in 12 days!

I pulled out my calculator, put on my Nancy Drew hat, and got to the bottom of this mystery. Turns out the StairMaster is listing the hypothetical number of floors needed to reach the very tips of the spires of these buildings. I figured out the StairMaster’s formula: It takes the total height of each building (2717 feet/828 meters in the case of Burj Khalifa) and divides it by what it considers to be the height of one floor (10.66 feet/3.25 meters). For the Burj Khalifa, the means the point of the spire is 255 “floors” up, even though the building only has 163 habitable floors (that’s a tall spire!). I tested my math across five of the featured building on the Landmarks page, and it’s true for all of them. And I finally learned what constitutes a floor on a StairMaster!

Of course, when I saw that the Burj Khalifa had 255 stories, according to the StairMaster, my mind started racing. I’ve been planning to climb 163 stories for my upcoming stair challenge… does this mean I need to raise my goal to 255? I decided I would think about it during the course of my workout. In the meantime, I selected Taipei 101 from the Landmarks screen – as it was a building I had yet to add to my Skyscraper Collection, and I started climbing.

I love the display during the climb. There’s a little silhouette of Taipei 101, and as you climb, it shows, on the silhouette, what floor you’re on. It’s easy to track time, speed, and calories. Plus, you can plug in your iPod and control it through the display (and the iPod charges during the process, which my iPod desperately needed yesterday).

OH! A little while ago, I was lamenting that some StairMasters used a steps-per-minute (SPM) calculation to determine speed, and others assigned arbitrary levels. This duality frustrated me, because I didn’t know how the two systems related to each other. Well, this kick-ass StairMaster has both systems! I’ve finally learned what I’ve been dying to know: that, for example, Level 7 is 68 SPM, Level 8 is 75 SPM, and Level 9 is 82 SPM. Finally!

My StairMaster workout was solid. I kinda made it to the top of Taipei 101, and I kinda didn’t. I climbed 114 stories in 25 minutes (burning 405 calories) – and that 114 stories is more than the actual building has in real life (it tops off at 101 stories), but less than the StairMaster’s top-of-the-spire count of 157.

I decided then and there that I won’t be adjusting my upcoming Burj Khalifa challenge to reflect this StairMaster’s math. My reasons are two-fold:

Because of that second bullet point, I’m adding Taipei 101 to my Skyscraper Collection. It’s 101 stories in real life, and I climbed 114 on the StairMaster, so I consider it conquered. Here is it, towering over its much shorter neighbors:

Taipei 101 is in Taipei, Taiwan, and it held the record of the world’s tallest building from its opening in 2004 until the Burj Khalifa took the title in 2010. There’s a 720-ton pendulum (!) that hangs in the center of the building from the 87th-92nd floor that sways to offset any movements that strong winds may cause. There are two observatories near the top of the building – one indoors and one outdoors. It’s rumored that the 101st floor is home to a top-secret VIP club called Summit 101, but no information about the club has ever been leaked to the press.

Yep… I climbed that! And after I was finished, I lifted weights for 40 minutes.

This entry was posted on Tuesday, April 10th, 2012 at 9:51 am and is filed under Uncategorized. You can follow any responses to this entry through the RSS 2.0 feed. You can leave a response, or trackback from your own site.

4 Responses to A Game-Changing Workout