Shall we start with a little update? Yes, let’s do that! I felt much better on Monday than I did over the weekend. I ate much better, and had a good workout. I actually had a great workout. One of the things that I didn’t mention in my last post was that, in addition to taking to my bed and not exercising, I also didn’t bother showering. At all. Yep, I’ll admit it. So when it came time to get my Monday workout rolling, I opted not to go to the gym. I felt a little too disgusting to be seen in public, and I didn’t feel like taking a shower just to go work out and shower again immediately after.

It’s days like this that I’m thankful for the little tiny gym in my building. It’s not very impressive… there’s an elliptical, a treadmill, a recumbent bike, some free weights, and a bowflex-type dealie, all in a room that can barely contain it all. I only use the gym occasionally, but a vast majority of the time I’m the only one in there. The ceiling is low, so when I’m on the treadmill and especially the elliptical, I feel like I’m inches away from a major traumatic head injury. The bike, though, is perfect – and it’s my favorite bike, because it has games that you power by pedaling! There’s a game called Fat Blocker, which is basically a rip-off of Tetris with enough small changes to avoid copyright infringement. I played Fat Blocker during my entire workout – 66 minutes on that bike – and, in the process, set a new high score! I beat my own record – in fact, I’m the only one on the leaderboard, so I beat all my previous records. I burned more than 450 calories and became a puzzle game champion – that’s a productive 66 minutes!

It’s now February 7th, and I realize that I completely forgot about one of my favorite posts: my Monthly Progress Report! This marks Year 2 of these reports (see my 2011 Year-End Progress Report here). Here’s my month of January: 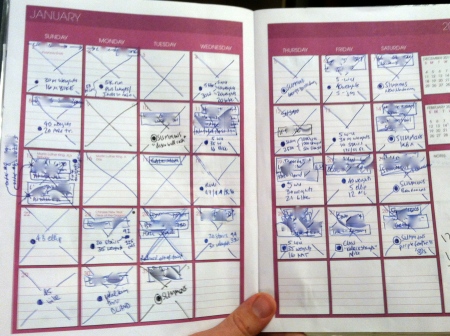 January was a long month! When it began, I was still in the Caribbean, working out every day on a cruise ship. January also marked my first trip to Disneyland, my first trip in a decade to a nightclub, and the biggest addition ever to my Skyscraper Collection. That last link is also where you can read about the big gym decision that I made, although that story isn’t quite over yet – more news on that in an upcoming post!

Each dot marks a workout. January has 31 days. Count up those dots, and I worked out 26 of the 31 days – an 83% success rate. That’s down slightly from my January 2011 total (27/31 days = 87%), but this year, I took 7 of Richard’s classes at Slimmons, and that’s more in one month than during any month in 2011. I also took a class at my new gym, and completed 12 workouts with an emphasis on weightlifting. A very successful month! Let’s compare it with the past few months:

January 2012 had my highest percentage in 6 months!

This entry was posted on Tuesday, February 7th, 2012 at 12:23 am and is filed under Uncategorized. You can follow any responses to this entry through the RSS 2.0 feed. You can leave a response, or trackback from your own site.