What’s In The RediSetGo? Part Nineteen

I tend to be gravitating less and less towards my RediSetGo ever since it replaced Guy Fieri at the top of my shit list.  I’m sure Mr. Fieri is a nice guy, and he hasn’t done anything to me personally, but man, I can’t stand watching him on TV.

Anyhoo, despite the fact that the RediSetGo isn’t my favorite kitchen appliance anymore, it’s still good for a lot of things, and over the weekend, it was perfect for something I was putting together.  And that means it’s time to play the biggest online game since Bejeweled Blitz…

It’s easy.  It’s fun.  Invite your friends to play, and then talk about it tomorrow at the watercooler.  If you’ve never played before, you’ll catch on quickly.  And if you want to play more, check out the archives on the My Favorite Posts page.

So pop in your earplugs and slide on your safety goggles, because it’s time to play! 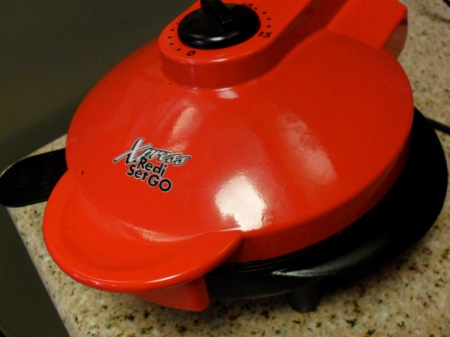 VEGETARIAN BREAKFAST SAUSAGES are in the RediSetGo!

Normally in these What’s In The RediSetGo? posts, this is the part where I explain how this is one step in an exciting and healthy recipe of some sort, but this post is a little different.  Let me explain.

I was invited to brunch at my aunt and uncle’s place on Sunday to celebrate my cousin’s birthday.  I can’t believe that Aaron is 17.  SEVENTEEN.  Yikes.  How old does that make me?  Anyway, I wanted to contribute something to the brunch, and I offered to bring a fruit tray, and that idea went over well.

And yet, those are sausages, so you’re probably wondering, what gives?

My cousin Erik (Aaron’s older brother) is a complete weirdo that, for some reason, doesn’t like fruit.  At all.  No varieties.  He doesn’t eat it.  I don’t understand it at all.  Who doesn’t like fruit?  Erik, that’s who.

I should backpedal and clarify that Erik’s not a complete weirdo.  In fact, the fruit thing is quite possibly the weirdest thing about him, and if someone’s weirdest quality is that they’re a finicky eater, well, then, they have less problems that I do.  Maybe I’m the complete weirdo for thinking he’s a complete weirdo.

Anyway.  I didn’t want to bring something that everyone couldn’t enjoy, so I had a brainstorm that fruit and meat can go well together, and, when I was last at Whole Foods, I picked up a cantaloupe and some prosciutto:

Prosciutto is a dry-cured Italian ham that is usually thin-sliced and completely delicious.  And, you can wrap little strips around melon and the combo of salty and sweet is amazing:

I thought this was a clever solution, until I remembered two things:

Well, to be fair, Erik’s a vegetarian except that he eats meat.  He and his wife (also a vegetarian, but, thankfully, also a fruitatarian) don’t buy meat and don’t cook with meat, but Erik still sometimes eats meat when he’s out and about.  Maybe that’s the weirdest thing about Erik.  Sheesh, I hope Erik doesn’t read this, because it sounds like I’m really bad-mouthing him, but I love him to death and I’m happy he has a healthy sense of humor.  Right, Erik?  Ha ha, this is all VERY FUNNY.  And who am I kidding, of COURSE Erik will read this, because I’ll probably send him the link myself.

So, after rolling up a bunch of melon/prosciutto bites, and realizing they don’t solve the problem of providing something that everyone could enjoy, I went to Plan B – the vegetarian breakfast sausages:

I pulled out the RediSetGo because I knew they’d brown well in it, and I wouldn’t have to tend them – I could continue working on my fruit platter without any worry.  Sure enough, after 6 or 7 minutes, they looked great (see second picture) and I cut them into pieces and impaled them on toothpicks:

Then came lots and lots of fruit, and VOILA!  A finished fruit plate: 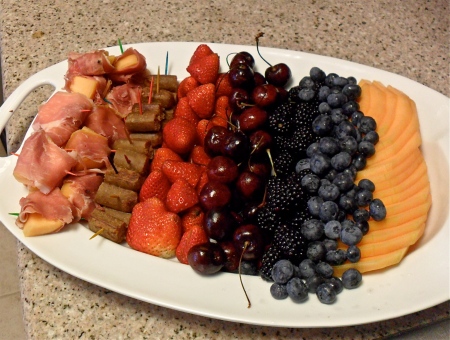 From left to right, we have: the melon/prosciutto bites, the veggie sausage bites, strawberries, cherries, blackberries, blueberries, and meat-free cantaloupe.

The platter was a hit with everyone, including Erik, and it turned out to be a really nice day with the family.

After brunch, Aaron and I went for a run.  The last time I went running with Aaron, in the spring, he gave me a little lesson on proper running form, which he’s familiar with, as he’s on his high school’s track and cross-country teams.  He basically noted that I was heel-striking, which is bad on your knees and hips, and gave me some pointers on how to combat it.

This time around, Aaron said my form had improved a lot, which was great to hear, although I know I slip back into my heel-striking ways when I get tired and sloppy (which he noticed too).  For our run, we drove to Aaron’s high school, and we ran a loop around the sports fields that equaled about 1.25 miles.  Then, since my slowpoke pace was holding Aaron back, he took off so he could complete his own running goals for the day,  and I veered from Aaron’s course and ran around the entire campus, ducking in and out of courtyards and around buildings, and we met up on the track at the end for a few final laps.  Altogether, we ran for about 35 minutes, in the hot hot sun, but I have no idea how much distance I covered.  No matter, though – it was my first run since I ran two days in a row in Seattle, and it felt great.

This entry was posted on Tuesday, August 23rd, 2011 at 1:49 am and is filed under Uncategorized. You can follow any responses to this entry through the RSS 2.0 feed. You can leave a response, or trackback from your own site.

5 Responses to What’s In The RediSetGo? Part Nineteen