I’m writing this post direct from sunny (and hot) Las Vegas, Nevada!  Whew, is it hot!  As I write this, it’s 94 degrees and 8:30am.  It’s supposed to get up to 104 today!  I’m used to heat, living in Los Angeles, but it feels different here.  Here, every time I open a door and walk outside, the heat slams into me and for a second it feels like I’m moving slower, moving through jello, until my body adjusts.  It’s not stopping me from going outside, that’s for sure, although I have reaffirmed my love of air conditioning.

I came to Vegas for a specific event, and I know I promised the other day I’d share what that was, and I will.  Soon.  I have a full run-down planned.  I just need a little more time to process it all.

In the meantime, I’m feeling really proud.  And smart.  And here’s why:

Since I began losing weight, I’ve given a lot more thought to eating while travelling.  It’s hard to eat well in general, let alone when you’re removed from your normal setting and your normal routine!  There have been trips in the past where, although I didn’t admit it at the time, I was worried about eating smartly while away from home.  Last Thanksgiving springs to mind as one of those trips, but I channeled my worrying into creating a game plan to get me through the big meal, made sure I exercised, and ended up losing a pound that week (!).

Creating game plans works for me, so, before coming to Las Vegas, I put one together.  Vegas is full of temptation, food and otherwise, and I wanted to guarantee some healthy options for myself.  The other big thing I to consider was the 4-hour drive from Los Angeles to Las Vegas – that’s a lot of time in the car, and I didn’t want to arrive in Las Vegas ravenous, nor did I want to reply on food I found on the way, because between Los Angeles and Vegas there’s a LOT of desert, and the exits that do have civilization tend to be limited to fast food and gas station mini-marts.

Remember on Passions when both Tabitha and Endora had their magic wands (they were witches, after all), and the magical forces streaming from their wands crossed, and it caused the earthquake and tsunami that devastated the whole town and killed Maureen, who asked Sheridan, as she was dying, to raise her son Mark?  No?  Only me?

Before I left the house, I threw a couple ice packs and 2 bottles of water in the bag, as well as all the remaining produce I had on hand.  Knowing that I’d be leaving town for 6 days, I limited my produce on my last shopping trip to stuff I thought I’d be able to consume before leaving, and I did pretty well – I ate everything but 1/2 a cucumber, 1 zucchini, and 2 apples, all of which came along for the trip: 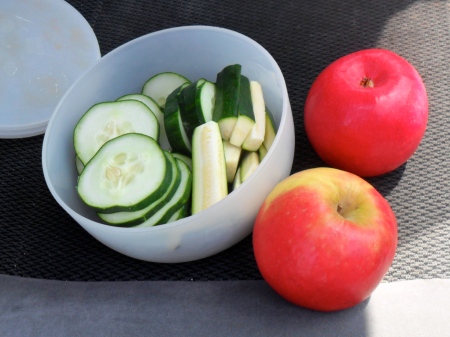 Apart from 2 lemons and 1/2 a head of garlic, my kitchen is now devoid of produce!

Then, on the way out of town, I stopped at Whole Foods.  The goal of the stop was to pick up food for lunch (to be eaten in the car) and dinner (to be eaten upon arrival in Vegas).  I also decided to buy some food for the next day in Vegas (which would eliminate temptation and save money) – with the idea that when I got to the hotel, I’d clear out the mini-bar in my room and stash the refrigerated items there.

Wanna see what I bought?  Here’s my haul.

Apples and bananas travel so easily, so they were easy choices, and a couple cartons of washed and cut-up fruit (one had melon, the other had strawberries and blueberries). 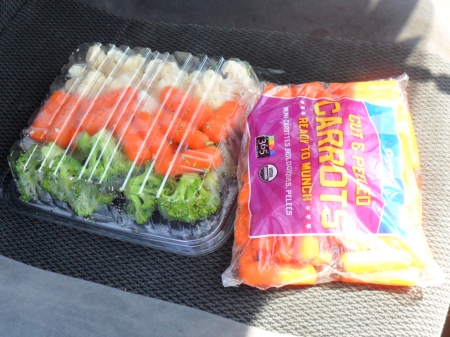 A 1-lb bag of baby carrots, and a big carton of broccoli, carrots, and cauliflower.  As soon as I pulled out of the parking lot, I wished I had gotten some celery too, but I didn’t go back.

I found this prepared vegan burger and grabbed it for dinner when I got to Vegas.  It has 370 cals and 3.5g fat.  The patty was good and flavorful and had a nice texture, and the bun was huge.  I could have tossed away half of it and saved those calories, but I didn’t.  What I didn’t think about was that, once I got to my room, I’d have no way of heating it.  So I ate it cold.  No big deal.

From left to right, we have:

The plan worked!  Lunch, consumed in stages during the drive, was the soy jerky, the cucumber and zucchini, the broccoli and carrots from that veggie carton, an apple, a banana, and about 2 servings of the persimmons.  Dinner was the veggie burger, the chip’ins, the cauliflower, and 2/3 of the melon.  I ate the final 1/3 of the melon as a snack a little later.

That left plenty of food for Day 2 in Vegas.  It won’t be enough to make it through the whole day, but it’s a great start.

Oh, and part of my plan was thwarted by the absence of a mini-bar in my room.  D’oh!  But I did have an ice bucket, so I filled that with ice and kept the cooler bag zipped all night.  In the morning, the ice was melted but the food was nice and cool.

Time to hit the hotel gym!

This entry was posted on Saturday, July 30th, 2011 at 1:11 am and is filed under Uncategorized. You can follow any responses to this entry through the RSS 2.0 feed. You can leave a response, or trackback from your own site.