Earlier today I hung out with my friend Robert.  Robert and I worked together for 5 years, but I haven’t seen him at all since he quit that job about 3 years ago – until, that is, I ran into him at the store a few weeks ago.  We chatted a little bit then, and then a little bit on the phone earlier this week, and this morning, he came along with me to Slimmons.  Robert is an absolute riot.  Downright hilarious.  I had forgotten how much fun he was, and it was wonderful to catch up with him.

I always new Robert didn’t live far from me, but when he gave me his address so I could pick him up this morning, I learned he lived literally right around the corner.  It could easily walk there, and actually, I’ve run right past his house before when working out!

Robert had a great time at Slimmons (I’ll share a video from the class in a few days), and Richard jokingly gave me a tough time for bringing a friend who had the nerve to wear, to Richard Simmons’ exercise class, a t-shirt with a vintage Coca-Cola logo on it.  How dare you, Robert!

When I dropped Robert off afterwards, he invited me in to show me his house.  His house is really cozy and cute, and he has a great backyard, with a pool, a hot tub, and the thing that excited me the most…

Six months ago, I didn’t even know what a kumquat was.  I tried one for the very first time in December, when I was in Michigan for the holidays, and I saw them at the store and decided to give them a whirl.  Read that blog post here.  I’ve never seen a kumquat tree before, and guess what?  It looks like a tree that’s covered with kumquats. 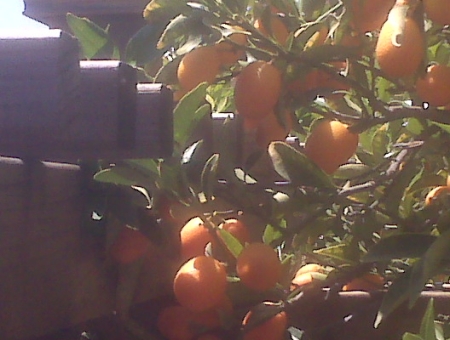 Sorry that pictures aren’t the greatest – I only had my cell phone camera on me.

Robert snapped a pic of me picking kumquats: 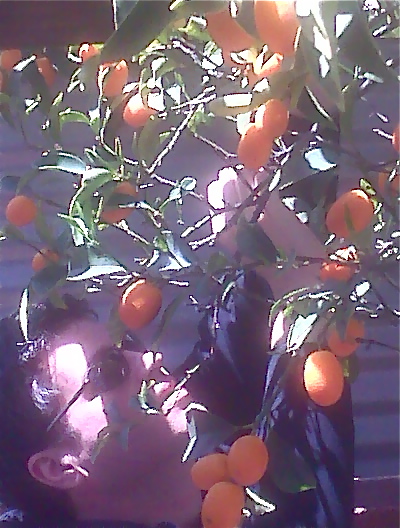 Here’s what I wrote about kumquats last December:

They’re little tiny citrus fruits, like mini oranges, but the size of a large olive.  Unlike oranges, you can eat the rind of the kumquat, which is a good thing, because they’d be a pain in the ass to peel, and there wouldn’t be much left.  My dad and I tried them after dinner, and they were strange, but good.  The rind is sweet, like an orange, but the pulp in the middle is tart, like a grapefruit, but more potent.  My dad’s review is that they “are bursting with flavor.”   And they’re less than 15 calories apiece, if you’re interested in calorie counts, and a good source of vitamins A & C.

I was looking around on the interwebs a little bit just now, and I realized that I was wrong before – kumquats aren’t actually citrus fruits at all – they belong to a different plant genus altogether.  And I thought kumquats were originally from the middle east, but that’s wrong too – they’re thought to be native to China, where historians have found references to them in literature dating back to the 12th century.  Whoa, that’s before I was born!

Robert says his kumquat tree produces fruit year round, and since he has way more kumquats than he could ever deal with, he gave me a bag and let me go crazy.  I ended up taking home lots of kumquats – here they are on Robert’s table: 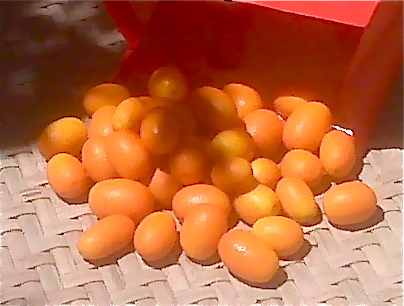 I ate probably 6 or 7 kumquats at Robert’s house, and I just counted the kumquats that came home with me – there’s 61 of them, all hanging out in a bowl on my dining table.

This entry was posted on Sunday, May 1st, 2011 at 12:17 am and is filed under Uncategorized. You can follow any responses to this entry through the RSS 2.0 feed. You can leave a response, or trackback from your own site.