Part 1: Annie. Last night, I headed out to my aunt and uncle’s place in Glendora, a eastern suburb of Los Angeles, about 45 minutes from me.  We were going to go see Paula Poundstone perform at a local college, but first, my aunt Annie made a delicious dinner.  So, being a good blogger, I photographed it, which excited Annie, because she really wants to be in this blog, which is a fact she mentioned only about  14 times over the course of the evening.  OK, Annie, I hear ya, loud and clear! Honestly, though, I would have put it in the blog anyway, because she was very thoughtful in her cooking in regards to the way I’m eating, and plus, she used an ingredient I’ve never tried before!

That new-to-me ingredient is cactus.  Yep, cactus!  I’ve seen fresh cactus in the produce section of some Mexican supermarkets in Los Angeles, but I’ve never bought it, and I don’t think I’ve ever eaten it before.  So Annie’s cactus salad definitely marked a first in my life.  Here it is:

It has three ingredients – how easy is that?  There’s diced Maui onion, cilantro, and the star of the dish, the cactus.  Annie’s cactus came from a jar, where it’s pickled in vinegar.  They’re called nopalitos, and they’re cut-up strips of the pads from a prickly pear cactus.  I don’t know what brand Annie used, but here’s a random image that I pulled off the interweb: 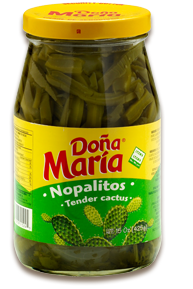 They look like green beans, but they’re not.  Annie dumped the contents into a colander, draining the brine, and then rinsed them a little bit, so wash some of the excess vinegar taste away, then added the onion and cilantro, and voila! A finished salad.  It was delicious, and I’ll definitely keep my eyes open for cactus at the store – apparently it’s hard to miss in the Mexican food aisle.

Annie’s main course last night was turkey chili, which had at least five kinds of beans, and was topped with a little nonfat Greek Yogurt, cilantro, and a rectangle of homemade corn bread:

While Annie tossed the strawberries in sugar, to pull out their juices, she set aside some of the strawberries for me before doing that, so my serving had no added sugar.  Annie also made the biscuits, and I intended to only eat half of it, but ended up nibbling away at the other half during our post-dinner chit-chat until it was all gone.  Oh well.  It’s just a biscuit.

The whole meal was very tasty and filling, so thank you, Annie – nicely done!

Then we were off to Citrus College, and we all had a great time at Paula Poundstone’s show.  I’ve seen her perform live once before, about 10 or 11 years ago, and she was great then, and she was great last night.  She interacts a lot with the audience, which makes each show pretty unique, and the way she weaves her material in and out of the conversations she has with audience members is pretty ingenious.

We got to meet Paula after the show, briefly, and she signed my program.  See?

I’ll add that to my celebrity autograph collection, which, up until this point, consisted solely of autographs from stars of the NBC soap opera Passions, which I watched religiously for 4 or 5 years, and loved.  So Paula’s John Hancock is in very good company.

I’m tempted to write about 8 more paragraphs on Passions but I’ll save that for another time.

Part 2: Vasquez. Regular blog readers know that I’ve been having a tough time with Sundays lately.  Two Sundays ago, I ate way too much at a party, and last Sunday, I had a cereal binge in the comfort of my own home.  Today, though, I had a plan of attack to get through my Sunday without getting off program – and that plan was: I gotta keep myself busy.

My friend Judie called the other day and asked if I would help her out at the garage sale she was having this morning, so I said yes, partly because I haven’t seen her in a while, and partly because it would take up the entire morning, and therefore be a big help towards the completion of a busy, binge-free day.  I was in my car by 7:30am, and stayed up at Judie’s until 11:30 or so, before heading back into town.

I say ‘back into town’ because Judie lives in Acton, which is about 45 minutes in the mountains northeast of Los Angeles, and it’s beautiful there.  My original plan was to leave Judie’s and head straight to the gym, but as I was pulling away from Judie’s place, I made the impromptu executive decision to go hiking instead.  Judie lives minutes away from Vasquez Rocks, a county park that is drop dead gorgeous, and I’ve never hiked it.

I’ve blogged before about Vasquez Rocks, because Judie and I stopped by and took a few pictures there back in November, so check it out – there’s also some great pictures of Judie’s animals (and she has a lot).

Vasquez Rocks is full of cool rock formations, and movie studios have been heading there for literally 100 years (since the birth of cinema) to use it as a filming location.  In addition to countless Westerns, Vasquez Rocks has been used as various other planets on the original Star Trek series, and the town of Bedrock in the 1994 live-action The Flintstones was built there, too.  Today, there were a lot of people clamoring all over the rocks near the parking lots, but once I ventured further in, it was peaceful and quiet, and I had a good 80-minute hike.  It was pretty easy, as hikes go – no huge hills or anything – and I want to come back, just for the scenery.  I didn’t go crazy with my camera, but I did snap a few pics: 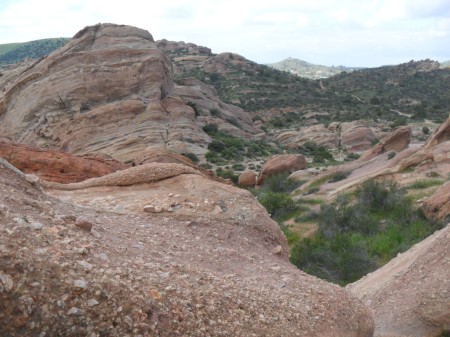 Now it’s time to pay some bills, make some dinner, do some cleaning of myvplace, and a little later, I’m hanging out with a friend.  It’s a few minutes before 6pm right now, But I’m going to go ahead and declare than my Sunday has been binge-free and healthy.

This entry was posted on Sunday, April 3rd, 2011 at 5:54 pm and is filed under Uncategorized. You can follow any responses to this entry through the RSS 2.0 feed. You can leave a response, or trackback from your own site.

13 Responses to Annie and Vasquez