Platinum Card AND Another Pummelo

I got a little something in the mail the other day – a Platinum card.  While I do have good credit, it’s not a new Visa or MasterCard – it’s from Casual Male XL: 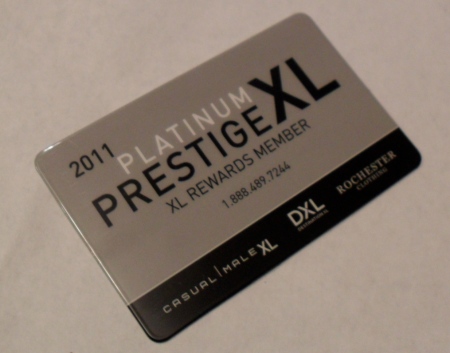 I’ve been a long-time member of Casual Male’s Rewards program – basically, every time I spent a couple hundred bucks there, I’d get a gift certificate for $10 to use on my next visit.  As Casual Male XL was one of the two Big and Tall stores in my area, I was getting those gift certificates a couple times a year.  Now, it seems, they’ve targeted me for a bigger, better Rewards program.  Apparently my spending habits make me an ideal candidate for their Platinum Prestige Program – at no cost to me! There’s just one problem – I’m done with Casual Male XL.  I stopped shopping there about 6 months ago (read my open letter to them after shopping there for the last time), because after losing so much weight, I found I could shop pretty much anywhere I wanted, which, by the way, is an incredible feeling after not being able to shop at many places at all for so many years.

I still get, however, mailings from Casual Male XL, and I’m still technically a member of their Rewards program, and I still get their catalogs.  I get lots of Big & Tall catalogs, from a bunch of retailers.  One arrives, on average, about once a week.  For a while I was using them to create a little humor on the blog (read all the Big & Tall Catalog Model Drama installments by going to My Favorite Posts and scrolling down), but now, I’m just getting sick of them.  Here’s my current catalog collection (which I was holding on to in case I wanted to use them somehow for the blog): 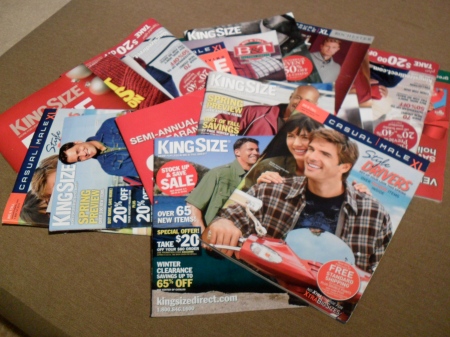 Bye-bye catalogs!  You have a hot date with the recycle bin in your future.  I’ve also added to my to-do list calling each company and removing myself from their mailing list.  I’m done with big and tall!  Done!

Earlier today I ate my second ever pummelo.  Earlier this month, I documented, on this blog, how I went about eating the first one (which was a process, but completely delicious), and I got great feedback from some of you about how you love pummelos, and I also got a suggestion I wanted to try, from Reinaldo.

Reinaldo is a fitness blogger in Chile, who has lost a bunch of weight and writes about his process.  While Spanish is his native language, he blogs in English, which he taught himself – very impressive!  Check out his blog here.  He suggested eating a pummelo this way:

Easier way to eat them tip: just slice it! Like you would slice a tomato into little “wheels”. Then dig in into the fruit’s meat with your mouth, and discard the outer ring. Messier (because of the juice), but a lot more faster and fun.

I bought another pummelo last week and decided to give it a go.  Here’s the pummelo after I started cutting it into wheels: 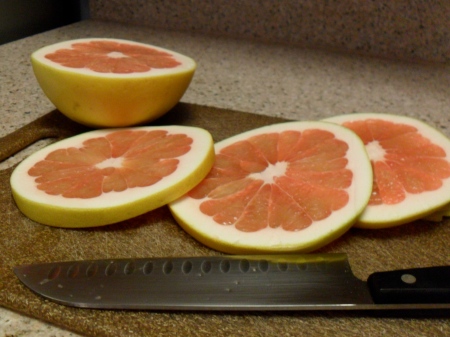 But that picture doesn’t really give you any sense of scale, so here’s one wheel, with my hand in the picture, too: 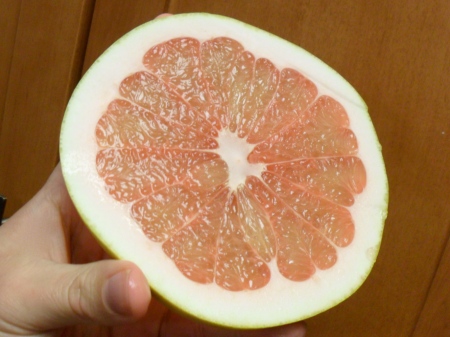 That’s a big pummelo!  The first couple pieces I ate like Reinaldo suggested – digging into the flesh with my teeth, standing over my sink, letting the juices dribble down my chin.  So tasty!  But I wanted to enjoy the rest while watching TV (because I watch a lot of TV), so I took a few more slices, cut around the inside of the outer peel to separate the peel from the flesh, and cut out the little core, too:  I put them on a plate (don’t they look pretty?), and you can see the peels in the background: 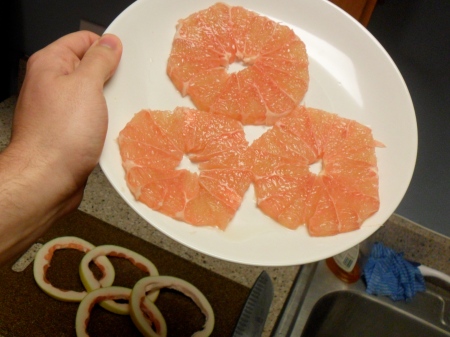 In total, I’d say I spent 5 minutes chopping apart this pummelo, compared to, I don’t know, 15 minutes the first time around?  I love a good time saver, so thank you Reinaldo!  I’ll be enjoying many more pummelos this way, I’m certain of it!

This entry was posted on Saturday, February 19th, 2011 at 1:00 am and is filed under Uncategorized. You can follow any responses to this entry through the RSS 2.0 feed. You can leave a response, or trackback from your own site.

7 Responses to Platinum Card AND Another Pummelo