Last week, I purchased a pummelo at Whole Foods.  It was the first time I’ve ever bought a pummelo, after learning about it a few days prior on Twitter from Julia, another weight loss blogger (read her blog here).

Yesterday, I ate the pummelo, and documented the process with my camera.  ‘Process’ is a good word, actually, because it ain’t easy to eat a pummelo, but it’s worth it!

Here’s the pummelo, just a-sittin’ on my counter: 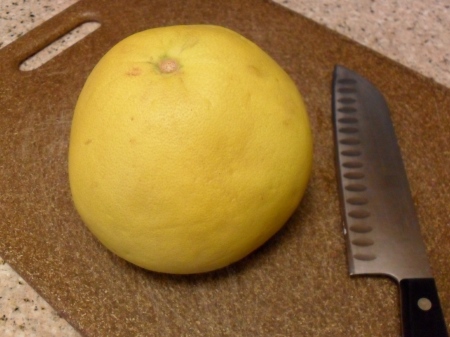 It was big.  Bigger than a grapefruit, bigger than a softball, not as big as a basketball, but definitely the biggest non-melon piece of fruit I’ve ever held in my hands.  I’ve seen mini-watermelons and cantaloupe that are smaller.  I didn’t weigh the pummelo, but I’ve read that they routinely get anywhere between 2 and 4 pounds, and can get as big as 20 pounds!  They’re the largest citrus fruit in the world, and some people (fruit scholars, I suppose?) think they’re the forebear of grapefruits.  Here’s some other pummelo fun facts:

I was planning on just peeling and eating the pummelo, until I saw this YouTube video (that Julia shared on Twitter).  I basically followed what the guy in the video did – I’ll walk you through it.

First, I sliced off the very top of the pummelo, then scored the skin into a big giant X, so you can pull the skin away from the flesh on the inside: 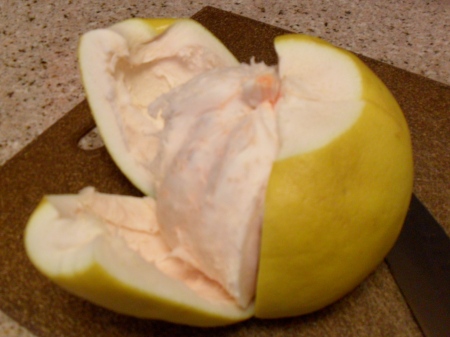 The skin is very soft and spongy and thick, almost like a marshmallow.  Here’s the flesh of the pummelo fully separated from the skin: 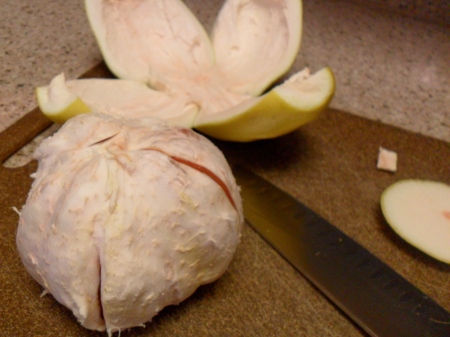 Then I started breaking the pummelo down into segments.  You have to separate and peel ever- membrane from in-between every segment, which takes a while.  This particular pummelo had pretty narrow segments, so it took me a few tries before I was able to peel a segment and get one on a plate all in one piece (more or less): 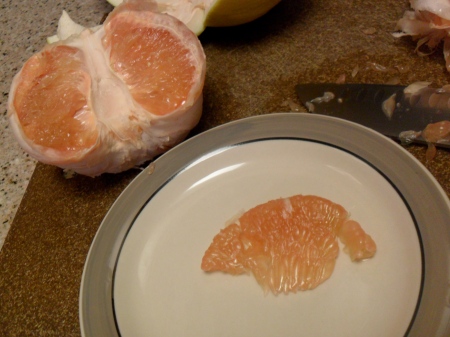 The pummelo was delicious.  It was milder than a grapefruit, but still sour, although not bitter.  It was juicy, and it just kinda fell apart in my mouth (although maybe that was because the segments were so narrow).  Various online nutrition guides say that about 1/4 of a pummelo equals a serving size (with 60-72 calories and almost double your Vitamin C needs for the day), but I ate the whole thing.  I stopped taking pictures because my fingers got so sticky and wet with pummelo juice, but after I was done, I took one final picture of the damage – because pummelos leave behind a lot that goes in the trash or compost bin: 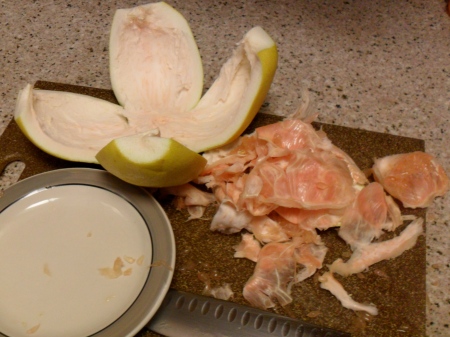 I’m definitely buying more pummelos.  You should give one a try, too!

This entry was posted on Tuesday, February 8th, 2011 at 4:28 pm and is filed under Uncategorized. You can follow any responses to this entry through the RSS 2.0 feed. You can leave a response, or trackback from your own site.