This week I cleared out space in my closet and dressers.  I few days ago I got, in my hot little hands, the gift cards that were so generously given to me by Ellen (which arrived to the Ellen offices when I was in Michigan, so I didn’t get them until I got back).  Which means that yesterday, I was in the perfect position…

My friend Jen came along with me – she can work her way through a mall better than most people (certainly me), and she has a great eye and fashion sense.  Here are three more reasons I love shopping with Jen:

We went to The Americana At Brand, the mall where I was given the gift cards.  It’s in downtown Glendale, California (only about 15 minutes from my place), and it opened a few years ago.  We only focused on clothing, but there’s also a big movie theater, a Barnes and Noble, a bunch of restaurants, and other shops and retailers.  There’s a park in the center, with some dancing fountains, and there are apartments and condos above all the stores:

By the time we left, it was turning dark.  Here’s one of their signs:

So…  wanna see the fashion show?

First stop was Urban Outfitters, where I picked up 2 shirts: 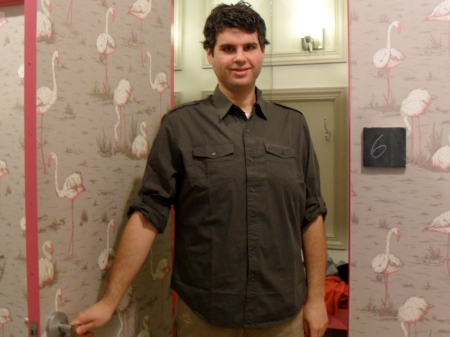 The orange plaid shirt may not be a keeper, I haven’t decided yet.  I like the colors, but it’s a tiny bit tight through the back and shoulders, so I may return it.  Those photos, by the way, are totally against the rules:  Jen was asked not to take photos in Urban Outfitters.  Whatever.   Oh, and guess who we ran into at Urban?  You’ll never guess.  My friend Glory!  I love Glory, she’s so hilarious and so much fun to be around.  Wanna see Glory in action?  She was on TV last month, and her skirt got ripped off – it’s very funny.

Next stop was H&M.  Glory had a few spare minutes, so she came along, too.  I probably tried on 10-12 different things, and found some keepers:

I love these pants.  It’s hard to tell in the picture, but they have a subtle gray/black/white plaid pattern, and a bunch of fun details.  The brown polo was really thin, and I didn’t love it, so I didn’t buy it.

My friend Jim will love that I bought this gingham shirt: 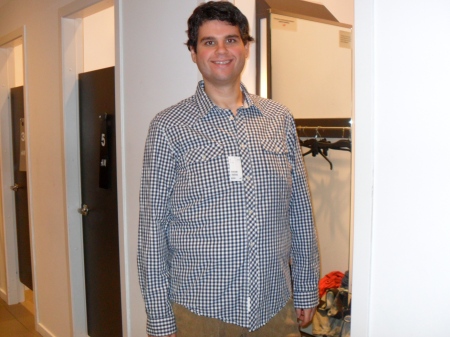 I also picked up a couple V-neck tees ($6 a piece) and a pair of black workout pants.

Right next store to H&M was Forever 21, which apparently has a men’s section.  I’d never been in a Forever 21 before – but this jacket was literally the first thing I picked up after walking in:

A saleswoman saw Jen take this picture and told her photos weren’t allowed in their store.  Oops.  She also asked Jen to delete the photo off the camera, and Jen did a bang-up job miming doing just that.  And I bought the jacket – it was only $37!

We headed into American Eagle Outfitters, where I picked up two t-shirts (buy one, get one 50% off).  Here’s one of them:

I wanted to see if I could find a new pair of sneakers to work out in, so we ducked in the Puma store.  They didn’t have anything I liked in my size – I’m a size 14, and end up buying a lot of my shoes online – but I did find this shirt, and it was 50% off:

And there you have it, folks!  Everything I bought today at the Americana.

There was a lot of stuff I tried on and didn’t buy.  We went into A/X Armani Exchange, where I tried on a pair of pants and a zip-up top:

The photo doesn’t do justice all the details and seams in the pants, but they were too snug around my waist, and not quite my style – maybe if I owned a motorcycle.  The top, though, I debated.  It’s actually a dark navy zip-up dealie, and there’s a brighter blue lining that you can’t see.  It was on sale (50% off), and I would have bought it if they had it in a different color – I already have a zip-up hoodie that’s navy with brighter blue details.  I liked Armani Exchange, though, and will remember to go back once I settle into my final goal weight (which I haven’t determined yet).  They have fun, different clothes, but it’s too pricey for transition clothes.

Figuring out what stores I like and don’t like was actually one of the best things about this excursion (apart from buying lots of new stuff and not paying for a single cent of it).  I never stepped foot in any mall stores for probably a decade when I heavy, because I never could buy anything at any of them, and now, there’s just tons of places to check out.  I like Armani Exchange, but we also went into Calvin Klein, and I didn’t really like their stuff at all.  I tried on a couple things at J. Crew, found it pricey for transition clothes, but will probably go back once I reach a final goal weight (or, at least, check out their outlet store).  There’s stuff for me that I like at H&M and Urban Outfitters, too!

I’ll end this post with a couple definite ‘no’s.  This J. Crew long sleeve tee was not flattering… 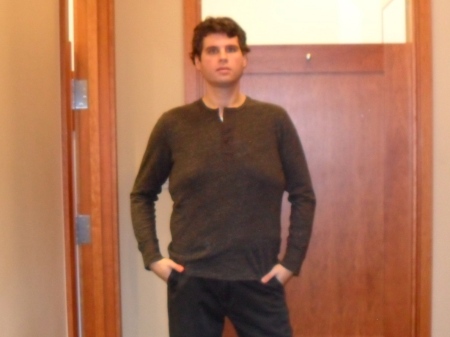 …nor was this long-sleeve number from Urban Outfitters: 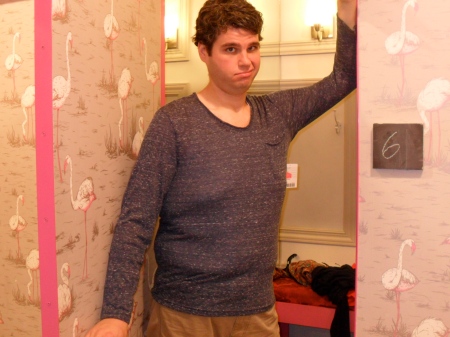 All told, I walked outta Americana with 4 tees, 4 button-down shirts, 1 jacket, and 2 pairs of pants.  Not too shabby!

This entry was posted on Sunday, January 30th, 2011 at 11:00 am and is filed under Uncategorized. You can follow any responses to this entry through the RSS 2.0 feed. You can leave a response, or trackback from your own site.