Midnight. “I’m going to have you step out of the car,” the officer said to me, the light from his flashlight partially blinding me.  I unbuckled my seatbelt, opened the door, and stepped out onto the two-lane country road.  I had glanced at the thermometer in the car moments earlier – it was 2 degrees outside.  2 degrees.  The night air gnawed at my fingers and ears – why did I leave my hat and gloves in the car?  The officer had me join him in the shoulder of the road between my parked car and his cruiser, brightly lit by the cruiser’s headlights, and within seconds my teeth were chattering.  “Please put your glasses right here,” the officer said, pointing to the trunk of my car.  I did as I was asked, and stood there, unable to see anything beyond a few feet, watching the heat from my own breath spiral upwards, like cigarette smoke.  The officer continued: “I’m going to have you do a couple field sobriety tests.”

9:30am (14 and a half hours earlier). The day started off like most days this week – at the gym.  I arrived at Bally’s, and quickly bolted from my car to the lobby.  I had made the decision at the house, before leaving, to wear my shorts and hoodie – it was going to be a long day, and I could save a few minutes if I didn’t have to change at the gym.  Sure, it was only 10 degrees outside, but I’d be fine wearing shorts for just the few seconds to get from my car into the building.  I ran a mile around the jogging track to warm up (in 10:45 seconds), then headed over to the stationary bikes.  The book I’m currently reading, The Story of Edgar Sawtelle, had gone from really good to can’t-put-it-down, and I know I can get a great workout in on the bike and tackle a few more chapters in the process.  It total, I spent 42 minutes pedaling away.

11am. I pull in the driveway, open the ashtray in the car to grab for the garage door opener, and it’s not there.  Crap.  I check my pockets and the arm rest, knowing full well the garage door opener isn’t in those spots either, my mind is fixated on the dining room table, where I remember leaving the opener last night.  Crap – why did I bring it inside the house?  Dumb move, David.  Because now you’re locked out. I don’t have a key to my parents house, just the garage door opener to get in.  Crap.  I make a mad dash around back, silently cursing my decision to wear shorts on a January day in Michigan, to check if any other doors were accidentally left unlocked, which of course they weren’t, and then I’m back in the car.  Time to head to my father’s office to borrow his keys.

11:40am. Back home, for the second time, with his keys in hand.  I made a quick breakfast – 2/3 cup egg whites, scrambled in Pam, carrot and celery sticks.  Part 1 of my breakfast was a big bunch of grapes that I ate before going to the gym.  Then I jumped in the shower.  By half past noon I was back in the car, where I began the 45 minute drive to Ann Arbor.

Midnight. “I’m going to move my pen from side to side, and up and down, and I want you to follow it with your eyes.  Only your eyes.  I don’t want to see your head moving, just your eyes.  I’ll try not to blind you with my flashlight.  Do you understand what to do?”  “Yes, Officer.”  He positioned the pen 6 inches in front of my face, and slowly moved it from left to right.  I followed it with my eyes.  I could see, in the darkness beyond the pen, a second officer that watched from the far side of the cruiser, not moving, his features obscured by the night.  Soon the pen moved up and down.  I followed it more.  Then the officer stepped alongside his cruiser, and ushered me towards him with a wave of his hand.  “May I put my glasses back on, officer?”  “Yes.”  The fields around me came into focus when I slid my glasses back onto my nose, as did the officer, who was pointing at the asphalt beneath our feet.  “You see this tire track?  I’m going to test how you walk.”

We both ordered chipatis, and here’s what mine looked like with it arrived: 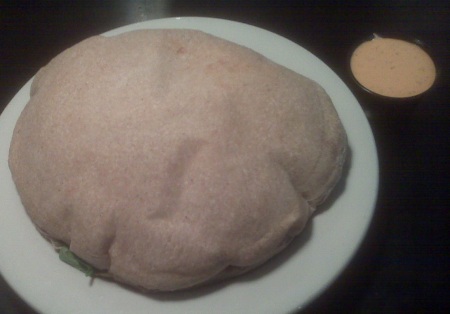 It looks like a giant loaf of bread, but it’s not!  It’s actually a whole wheat pita, and when you peel back the top layer of pita, you see: 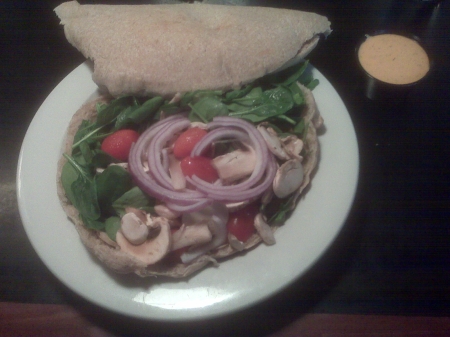 A salad! The one I ordered today was spinach, onion, mushroom, and tomatoes (it’s supposed to also have mozzarella, but I ordered it without).  The orange sauce on the side is Chipati Sauce, the dressing, which is delicious and somewhat mysterious, although according to a website I just found on the interwebs, it’s just a mix of ranch, Frank’s RedHot, and ketchup, which is disappointingly boring and pedestrian but probably true, for all I know.  I decided to only eat the top half of the pita, and used only a few teaspoons of Chipati Sauce, so it was a pretty healthy lunch. 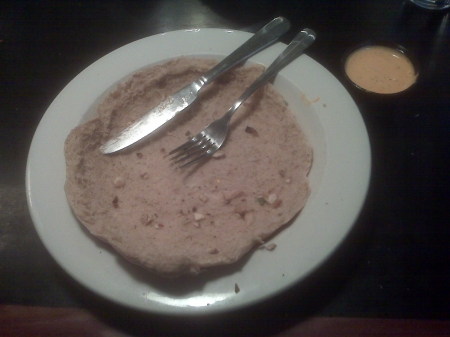 After lunch, we walked around the corner to another one of my favorite Ann Arbor establishments:

THE ARCADE!  I used to come to Pinball Pete’s between classes to play Ms. Pac-Man, my all-time favorite arcade game.  I was so glad to see they still had it!  Here I am playing:

Jim, meanwhile, is a Dance Dance Revolution fan, so he played that (I played once with him too): 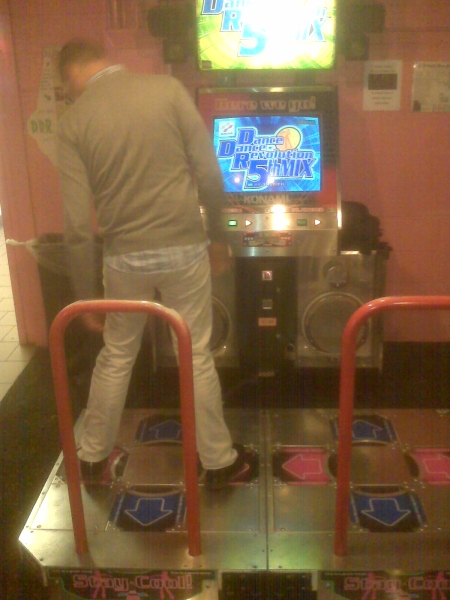 We made a stop at the University of Michigan Museum of Art, which, since I graduated, had built a new wing that has some of the coolest gallery and exhibit spaces I’ve ever seen.  It’s always been a nice museum, but now it’s stunning.  Go when you’re in town.

4:45pm. I dropped Jim back off at his office (I hope, Jim, that your boss doesn’t read this and learn about your nearly 3-hour-plus lunch!), and headed to North Campus.  This part of the University of Michigan is now home to the Theatre Department, of which I’m a proud alum, with a degree in Theatre Design and Production.  Every year, the students’ work (costume renderings, intricate models of set designs, and the like) is put on display for about a week in a gallery open to the public, and they kick off the week with a reception, which was that afternoon.  Being at the reception brought back a tsunami of memories, and it was great to see and catch up with a bunch of former professors and friends, and meet some of the students currently making their way through the program.

6pm. Back in the car, merging onto highway 23, starting the hour-long drive up to Flint, Michigan.

Midnight. “I’m going to have you walk nine steps, heel-to-toe, along this tire track.  Then you’re going to turn to your left, and walk nine steps in that direction.  And this is what I mean by heel-to-toe…”  The officer demonstrates.  “You may want to take your hands out of your pockets for this,” the officer advises.  My hands were in my pockets because they were freezing, but I do as he suggests, and start walking the line.  I wonder how much I have to stumble to fail, but I walk the nine steps, turn, and walk back towards my car.  I stop after the nine steps, and stand still, facing away from the officers.  “There’s just one more thing…” the officer says.

UH-OH – WHAT ELSE DID THE OFFICER WANT?  There’s only one way to find out – and that’s to come back for Part 2 of “January 21 Adventures” – which I’ll post before going to bed tonight!  I just love a good blog cliff-hanger...

This entry was posted on Saturday, January 22nd, 2011 at 9:47 am and is filed under Uncategorized. You can follow any responses to this entry through the RSS 2.0 feed. You can leave a response, or trackback from your own site.