Another Day, Another Gym

I decided this morning to keep switching things up and work out at the third gym in the area in Michigan.  It’s the Powerhouse Total Fitness Gym in West Bloomfield, and here it is:

Doesn’t it kinda look like a movie theater to you?  That’s because that’s what it used to be.  The building opened as the AMC Americana West 6, and I grew up going to see movies there.  The Americana West closed when I was in college or so, maybe even earlier than that, and a few years later, Powerhouse vacuumed up the popcorn crumbs embedded in the carpet, gutted the building, took down the marquee, and reopened the doors as a health and fitness emporium.

Powerhouse is a national chain that got started right here in the Detroit area, and now boasts more than 300 locations, including, according to their website, facilities in Chile, Germany, China, India, and Thailand.  There’s actually a location a few miles from my place in Los Angeles, and one of my neighbors is a member, and he really likes it – he says it has everything he needs and is pretty cheap.  I didn’t inquire about membership rates when I visited their West Bloomfield location today (nor did I inquire at Fitness 19 yesterday) – I just paid the 10-dollar day rate and worked out.  The ten dollars a day is adding up, but it’s only for a few more days, and I can swing it.  It’s the same or even cheaper than I pay to take classes at Slimmons or Heartbeat House in Los Angeles – therefore, it’s in the realm of ‘reasonable’ when it comes to exercise expenses.

This is my second visit to Powerhouse.  I came with both of my sisters a few days ago, because one sister wanted to take a spin class, which they offered.  The gym has three classrooms – a spin studio, a boxing/kickboxing studio, and a general big open space that’s used for everything else.  My sister liked the spin class – it was good and tough, although the music wasn’t her cup of tea.  That day I did 50 minutes on the CrossRamp.

Here’s the inside of Powerhouse: 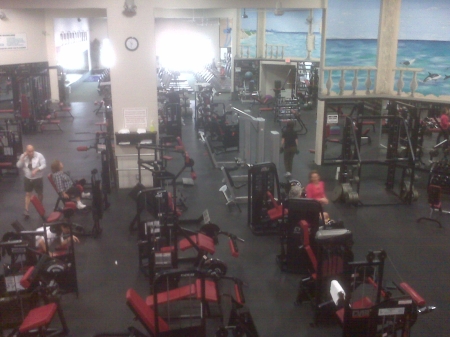 The weight area in the foreground used to be the theater where my dad and I saw an advance screening of “Jurassic Park” in 1993 (and on a school night, to boot!), and the cardio area, in the background, just before the blinding light of the sun, is where my sister and I saw “Clueless” in 1995.  I saw dozens of movies there over the years, but for some reason, I specifically remember which theaters those two movies were being shown in.

The ceilings are nice and high, and there’s big murals on the walls that used to have the movie screens.  Here’s my favorite one:

I like working out on top of pedestals on the beach wearing all pastels, so this mural really hit home for me.

Powerhouse also has a deli!  This is the first gym I’ve been to that sold food (excluding protein bars). I didn’t take a good look at the menu, but the guy at the front desk said it’s really good.  I sneakily took a picture:

I only got 2 of the refrigerated cases in the picture, but there’s about 8 total, mostly full of tons of beverages – from soda to Snapple to juice to protein shakes.

Today I decided to confront my dreaded enemy, the StairMaster, which I have not stepped foot on since early December, when I conquered my workout goal of climbing 73 stories without stopping.  Well, just in case you’re wondering, I still hate the StairMaster.  It’s a good workout, but it’s just terrible.  I managed to do 6 minutes and 30 seconds before stopping the machine and stepping down.  I climbed 31 flights.  So, without further ado, here’s the skyscraper of the day – Ocean Towers in South Padre Island, Texas.  And just to switch it up, instead of just a photo, it’s a YouTube video of Ocean Towers getting imploded!  Turns out the weight of the 31-story-condo building caused the ground to compress and shift during construction, making the building unsafe, forcing the developer to knock it down instead of completing it.  Whoops.

Then I hopped on the CrossRamp and finished my workout by completing 45 minutes – burning nearly 600 calories!

This entry was posted on Thursday, January 20th, 2011 at 4:14 pm and is filed under Uncategorized. You can follow any responses to this entry through the RSS 2.0 feed. You can leave a response, or trackback from your own site.

6 Responses to Another Day, Another Gym