A Hot Guy in Class Today

Whew!  It’s been a great Saturday, but a busy one, which is why it’s 6:30pm and I’m now just sitting down to write a post.  I intended to write one first thing in the morning, but my internet was acting up, and I decided to just walk away instead of fighting with it, because it doesn’t take much before I’m ready to throw electronics against the wall over and over and over and over again until they’re in a million little pieces.

I was prompted to start writing this morning because I stepped on the scale, and I’m… DOWN ANOTHER POUND!  151 pounds total, and one pound away from my next goal.  I’ll say that again, so it sinks in, because it definitely took a minute to sink in for me:  One. Measly. Pound. Away. From. My. Next. Goal.  I’m so close!

I’ll lose that one pound in the near future, I’m sure of it.  Until then, I’ll focus on the pound I just lost.  Here it is on the chart:

Oh, how I like how that line continues downward.

Yesterday was also a great day – I spent all afternoon with a really good friend and former roommate from college, Collin, who was in town from Seattle, where he is a hotshot lawyer winning cases, changing lives, putting bad guys behind bars, and walking around with briefcases, just like on “Boston Legal” or “Law & Order.”  We went for a nice long walk up and down the Venice Beach boardwalk, dodging marijuana legalization advocates and dudes peddling their reggae music.  We also had lunch at a sidewalk cafe that was cleverly named ‘The Sidewalk Cafe’ (I had an egg-white omelet with spinach and onion, dry wheat toast, tomato slices, and sparkling water) and did a lot of catching up.  I haven’t seen Collin for over two years, and I hope he doesn’t mind making an appearance on my blog, because of I have Before and Current Photos!

Summer 2008 in West Hollywood (I don’t know what’s on my shirt – I must have spilled something?): 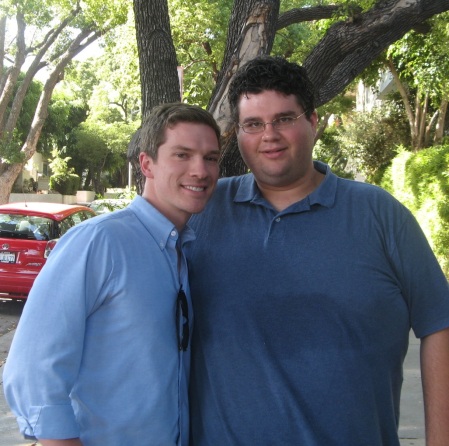 Look at that handsome devil.  Oh, and Collin.   HA!  That joke never gets old.  Collin is also very handsome, as you can see.

I’ll end this post with a little anecdote that made my day today.  Earlier, before running errands and taking care of a few things, I spent the morning at Slimmons, where I took Richard Simmons’ aerobics class.  I said hello to a friend – a woman that also takes classes.  I’m withholding her name, because I don’t think she knows about this blog.  I don’t know her well – just from small talk before and after classes, but this is what she said to me today:

“Oh my God, you look great!  I haven’t seen you in a few weeks, and when I came in, I didn’t even recognize you!  This may sound weird, coming from an old lady, but I saw you when I came in and said to myself, ‘Oh yay!  There’s a hot guy in class today!’  And then I looked again, and realized it was you!”

I really have nothing to say to that except for…

PS – For the record, I’ve never thought of her as an old lady, even know she is older than me.  Those were her words, not mine!

This entry was posted on Saturday, December 4th, 2010 at 6:59 pm and is filed under Uncategorized. You can follow any responses to this entry through the RSS 2.0 feed. You can leave a response, or trackback from your own site.

6 Responses to A Hot Guy in Class Today