What a nice Saturday it has been so far.  I slept in, for the first time in weeks, until about 10:30.  No alarms, no waking up and immediately racing through the day’s to-do list.

I plodded into my living room and finished watching the finale of Project Runway on my TiVo (I had fallen asleep with it on last night).  I won’t spoil for anyone that hasn’t seen it yet, but I was rooting for the other person to win.

I wasn’t very hungry today – still full from the chili and cheesecake I had last night, I suppose, but I ate a pear and a yogurt to get something in my system, and since I woudn’t make it to Richard Simmons’ class on time, I headed down to the tiny little gym in my building. 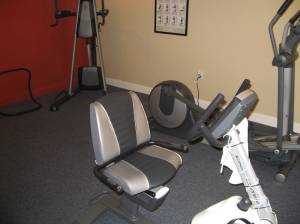 There’s a bike, an elliptical, a simple bowflex-type dealie, and some free weights.  I don’t come down here often, because most of the time I feel more committed to my workouts if I have to actually leave my house to complete them, but today I did 50 minutes on the bike, and worked up a nice sweat.  The bike has games in the control panel, so I played a Tetris knock-off called “Fat-Blocker” while pedaling away.

The rest of the day will include laundry, bills, and since I’m nine episodes behind on Mad Men (!), maybe I’ll watch a few of those, too.

I also weighed myself today.  Down another pound!  That was a nice surprise – I thought my recent general lack of exercise, my failure to keep a food log, and the big piece of cheesecake I had last night would mean that my little plateau would continue, but nope!  I attribute that pound that my healthy eating (cheesecake excluded).

That’s a total of 145 pounds lost, and only 7 pounds to go until I reach my next goal!

Time to update the chart:

This entry was posted on Saturday, October 30th, 2010 at 1:43 pm and is filed under Uncategorized. You can follow any responses to this entry through the RSS 2.0 feed. You can leave a response, or trackback from your own site.

5 Responses to A Relaxing Saturday