Previously on Keep It Up, David: I’m jogging now, and despite never setting foot in a strip club in my life, I set my first jogging goal: to jog past all four of the strip clubs within walking distance of my place – a route that totals 3.8 miles.  Until I discovered two more strip clubs during a recent practice jog, for a total of six strip clubs (you WISH you lived in my neighborhood, don’t you?), and a new route that stretches a whopping 6.4 miles.

A jogging milestone tonight!  I set a new personal best for distance, and reached my now-updated old first goal.  I jogged a total of 3.8 miles – past the original four strip clubs that I knew about in my neighborhood!  I can’t say that I reached my strip club goal, as the goal evolved with the discovery of the two additional neighborhood strip clubs, but I’m extremely proud anyway.  Had I not discovered those two other strip clubs, then man oh man I’d really be celebrating!  As a reminder, here’s the 4-strip-club route: 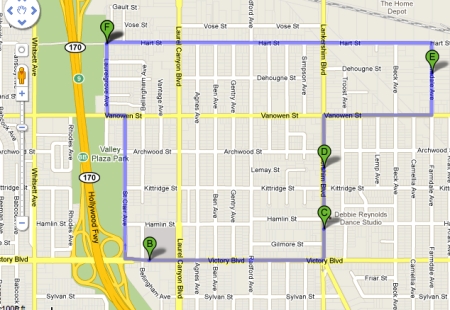 Dot F is a park near my place that’s the starting and stopping point, and Dots B, C, D, and E are all strip clubs.

The best part about tonight was that I had a jogging buddy – one of my closest friends, Kristy Hanson.  Kristy is a crazy talented singer-songwriter who just released a new album, Into the Quiet (learn more about her by clicking here to get to her website, or click here to sample and buy her album on iTunes), but more importantly to me, she’s been a great friend for the 11 years I’ve known her.  And not just because she loved my jog-past-strip-clubs idea as soon as she heard it, and has wanted to come along for a jog pretty much ever since.  I’m so glad she drove all the way up from Culver City (waaaay on the other side of town from North Hollywood, for you non-LA types) to exercise tonight.

Of all the jogs I’ve completed in the short couple of months I’ve been jogging, about half have been with someone else, and half solo.  Having a jogging partner makes a huge difference!  I find that it’s super helpful to have someone else there to maintain pace and time flew by quicker because we were about to chit chat.

The plan is to take photos of me in front of all 6 strip clubs when I finally reach my goal of jogging past all of them.  Since we jogged past the original 4 tonight,  I decided that as a reward (and, more importantly, a treat for all my readers – you’re welcome!), I should take one photo, in front of one of the strip clubs, as a motivational tool.  And here it is:  Ladies and Gentleman, a very sweaty David and Kristy in front of V.I.P Showgirls in North Hollywood, California: 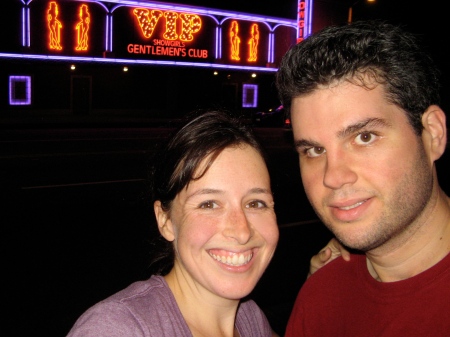 Both Kristy and I failed to note what time we started the jog, so I can’t calculate my MPH or update the chart I created after my last jog, but that’s no biggie.  This jog felt great, was exhausting, and was the longest jog I’ve ever accomplished (3.8 miles versus 3.3 miles).  I feel wonderful, and eager to keep jogging.  The 6.4 miles, 6-strip-club goal is still pretty far away, but I’ll get there.  I know I will.

This entry was posted on Wednesday, October 13th, 2010 at 1:01 am and is filed under Uncategorized. You can follow any responses to this entry through the RSS 2.0 feed. You can leave a response, or trackback from your own site.