Based partly on your comments to a post from a few days ago, I’ve decided to try buying produce from the new 99 Cent Store just down the street from my place.  There was a decent selection, and I ended up with a bag of 5 oranges, a bag of 6 peaches, a bag of 5 bosc pears, and a bag of mini sweet peppers:

I weighed it, and it ended up being close to 7 pounds of produce, for 4 bucks.   Very good deal!  Haven’t tried any of it yet, though, and not exactly sure what I’m going to do with it all.  I have a hunch all the pears and peaches will turn ripe at exactly the same moment – so maybe I’ll stash half of each in the fridge and slow their down their ripening.  Not too worried about the oranges – I can always just juice them if I want to.  And the peppers can go in one of the big salads I make about every other day.  Oh – I also liked that everything I bought, except for the peppers, was grown in the US (the peppers were Mexican).  I’ve been trying in the past few months to not buy produce from South America or New Zealand, especially since I live in California, which has a year-round growing climate and produces nearly half of entire country’s fruit, nut, and vegetable supply.

This morning I met up with a friend, Dave, for a hike.  We used to work together but I haven’t seen him in maybe three years or so.  We parked at the Griffith Park Observatory and took a trail neither of us had been on before, that winded up and around Griffith park, giving us views from the ocean to downtown and around to Glendale and Burbank.  It was a nice 90 minute or so excursion that had a pretty constant slight incline or decline, and it was really nice catching up with Dave.  I snapped a couple photos:

That’s the Observatory with the domed roof, and downtown LA in the back left.  For all you non-LA-readers, the yellowish-brown layer just above the horizon line is smog.  And this was on a reasonably clear day! 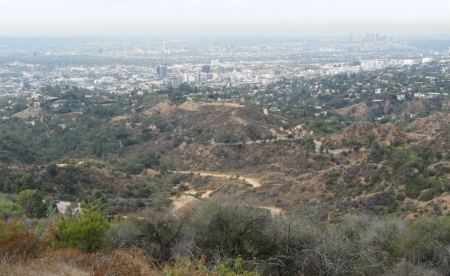 In the very back is the Pacific Ocean, with the skyscrapers in the back right being Century City, and the tall buildings just beyond the park being Hollywood.  And, of course, smog layer.

I love this photo because you very rarely see the Observatory with the city in the background, usually it’s the mountain that I’m standing on.  It’s nice to see a city landmark from a new perspective, no?  Looking at this photo makes me want to watch Rebel Without a Cause again (a lot of which was filmed at the Observatory).

Lastly, Dave took this photo of me and the Hollywood sign:

Does it look familiar?  It’s because I cropped it and made it black and white and stuck it up as the new header for my blog.  I’m not sure if I love it and will keep it forever, but it’s definitely more exciting than the default blue background that used to be up there.  What do you think, readers?  Do you like?

Breakfast today, pre-hike, was a nectarine and a pluot, and post-hike I had some cantaloupe, about 1/2 cup of great northern beans and some raw broccoli.

This entry was posted on Tuesday, September 28th, 2010 at 2:07 pm and is filed under Uncategorized. You can follow any responses to this entry through the RSS 2.0 feed. You can leave a response, or trackback from your own site.